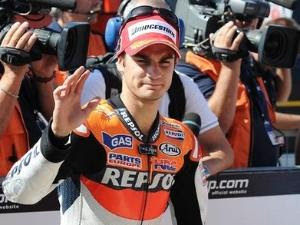 Pedrosa sidelined with collarbone injury after a fall at Le Mans.
Repsol Honda's Dani Pedrosa, MotoGP is certainly absent in the Netherlands, Saturday, June 25, 2011. Collarbone injury he suffered can not heal as fast as scheduled and make the Honda should be looking for a replacement.

Is a Japanese rider Hiroshi Aoyama, which will replace the position of Pedrosa at the TT Circuit Assen, the Netherlands, reports Eurosport. Not clear how long Aoyama will be in that position. However, it predicted only in Assen Aoyama services will be used.

Pedrosa sidelined with collarbone injury after falling at the circuit on the MotoGP France Le Mans in mid-May. Drivers who had come to Indonesia that should also increase the operating table twice to repair his right collarbone.

Last operation performed on June 16 and conducted by Dr. Xavier Mir and Dr. Cesar Garcia Madrid. Surgery performed to repair a small broken bone dislocations during rehabilitation.
Posted by ROHIB at 8:52 AM