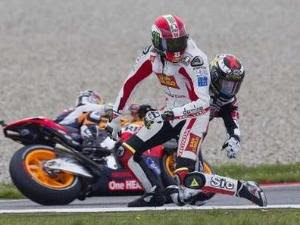 This is the second time Simoncelli has been criticized by fellow racers.
Honda rider Gresini Marco Simoncelli, again became a byword after falling at the Circuit Assen, Netherlands, Saturday, June 25, 2011 yesterday. Because, Simoncelli crashed drag racer Yamaha, Jorge Lorenzo, went off the track.

As a result, Lorenzo, who started from fourth position slipped to the back row of riders. With great difficulty Lorenzo finally able to finish in sixth position.

Top of this carelessness, Lorenzo expressed his frustration at Simoncelli. However, as a racer who has been criticized Simoncelli was not making mistakes.

"I'm not happy involving Lorenzo in the fall and I can only apologize to him. The only thing I regret is that I can back up bike and finish the race with a time of gratifying," said Simoncelli told Eurosport.

"That's just one of many bad experiences that I experienced. I'll take that burden on the mind without losing focus and motivation."

This is the second time Simoncelli has been criticized by fellow racers. In mid-May, the Italian man had already infuriated Honda rider Dani Pedrosa, MotoGP France.

Perdrosa fell after nudging the back of the motor Simoncelli who perform dangerous maneuvers with a cut from the outside. After the accident, Pedrosa looks still like to try over to his bike and continue racing.

However, Pedrosa looks in pain and failed to continue the race. While Simoncelli could continue to race and be able to finish in fifth.
Posted by ROHIB at 1:03 AM