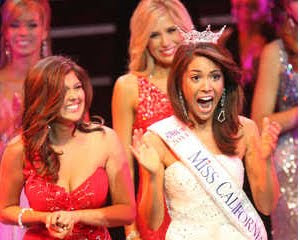 Freeman, who performed a “Black Swan” dance variation for her talent offering, received a $10,000 scholarship from the Miss California pageant. She also advances to the Miss America pageant, to be held in January in Las Vegas. There, she will compete against 49 other state representatives for the title of Miss America 2012.

Special thanks and credits to beautypageantnews.com
Posted by ROHIB at 8:11 AM