Messi: I Never Loved in Argentina 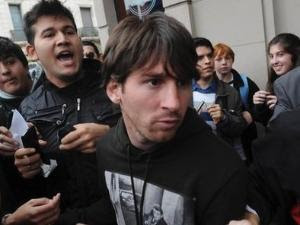 Messi will lead his colleagues in the Copa America which happens to be held in Argentina. Owner sacred number 10 is expected to be able to pass on his magic in Barcelona to the Argentina national team.

Yes, Messi is continue to reap the criticism when uniformed La Albiceleste. Some rabid fans Argentina Messi strike it deems not mean it as Caps. Not surprisingly, Messi will be desperate to deliver a champion Argentina in the Copa America this time.

"I never felt loved by the people of Argentina. This is the only place where I was not treated like in Barcelona," said Messi was quoted Yahoosport, Sunday, June 26, 2011.

"I have always spoken in Argentina because unfortunately we (Argentina) never won anything. I've won everything at club and people recognize it. Hopefully, I can do for Argentina right now," Messi added.

Messi is now wide open opportunities. Because the South American Continent tournament will be held at home by July next month. Lifting the Copa America to be the biggest dream Messi.

"My biggest dream is to win the Copa America. We know it means so much to me and Argentina," the world's best players.

Messi himself assess the strength of Argentina are now qualified to challenge the other candidates sorts of Brazil and Uruguay. Great hope now lies with the people of Argentina Lionel Messi and his friends.

Argentina under coach Sergio Batista will melakon opening match of Copa America on July 1 against Bolivia.
Posted by ROHIB at 4:46 PM