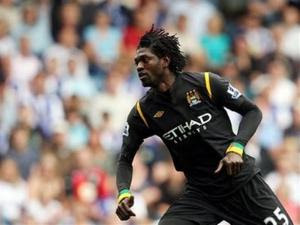 Players are brought in from Arsenal for 25 million pounds in 2009 it was no longer the primary option Man City manager Roberto Mancini. However stronghold City also did not want to release Emmanuel Adebayor with a low price.

Previously, Blackburn only want to pay 14 million pounds for Adebayor. In addition to Blackburn, Adebayor are also in demand Zenit St Petersburg. But two clubs that offer much of expectations. Therefore, The Citizens prefer to re-lend the Togo striker.

But until now, Madrid never reacted. It makes Adebayor, who would ask him back in Boyong to Santiago Bernabeu for the second time. "I'm happy to live in Madrid," said Adebayor reported by telegraph.

"It is very clear in my mind that I will not go to Blackburn or Zenit. I have fond memories of winning the trophy at Real Madrid," continued the 27 year-old attacker.

Middle of last season, Adebayor was brought Mourinho to line the front row of Madrid. Of the 14 times by Los Blancos, Adebayor scored five goals and present joined the King's Cup last season.

Previously, Adebayor has expressed his desire to retire from football at the age of 31 years. Former Arsenal striker is hoping to run a real estate business and focus with his family.
Posted by ROHIB at 8:02 AM