Zvonareva and Venus into Wimbledon second round 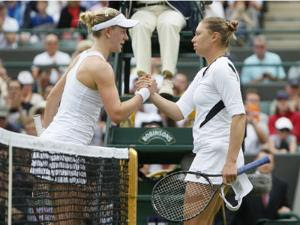 In the second round, Zvonareva will face compatriot Elena Vesnina opponent's victory over Laura Pous-Tio 6-4 6-3.

On the other parties, Venus Williams made ​​it through his first party with ease. He defeated Akgul Amanmuradova of Uzbekistan 6-3, 6-1.

Venus did 23 winners in a match that lasted 1 hour. The opponent's 13 unforced errors punua.

In the second half of Venus will face veteran, Kimiko Date-Krumm. Kimiko win over Katie O'Brien 6-0 7-5.
Posted by ROHIB at 10:36 PM

Email ThisBlogThis!Share to TwitterShare to FacebookShare to Pinterest
Labels: Zvonareva and Venus