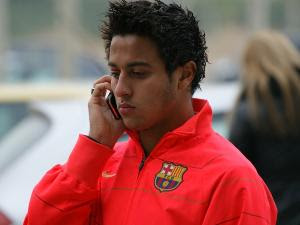 20-year-old player was already extended his contract with Barcelona. But, father Thiago admitted if he ever questioned about his son's stronghold of Madrid.

"Capital Club was once asked as he had done most of the European club," said the father Thiago, Mazinho told Ona FM.

Thiago renew his contract at Barca for 2 years. He will stay at Camp Nou until 2015. Barca camp apparently did not want to lose Thiago who was instrumental in the successful European champions Spain U-21 in Denmark.

Mazinho revealed, Thiago contract renewal process is very simple. "They called us on Tuesday, and the contract is complete. We did not linger in the deal."

Although the future was not clear Thiago, Mazinho sure if his son did not want to move from Barca. "He was very pleased with the extension of the contract. He wants to stay at Barcelona until the end of his career."
Posted by ROHIB at 8:06 AM

Email ThisBlogThis!Share to TwitterShare to FacebookShare to Pinterest
Labels: Real Madrid and Barcelona