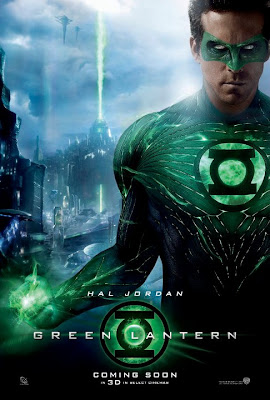 Thor and X-men First Class already made it through and I kinda like both of them so it;s now up to another comic book adaptation to try and hit the mark. This time it is DC's Green Lantern. And while the lantern is no Batman or Superman, it still packed some punch.

Green Lantern is a good movie in terms of storytelling. People who are not familiar with the Green Lantern will have an overview of who he is and how the story actually came about. The focus on the idea of a fealess superhero is attached to it from start but what is nice is that this idea is negated in the movie itself. it show that a hero should not be fearless but someone who feels fear and yet can overcome such situation. What makes this flick different from the other superhero films is is comic timing. There are several scenes where punchlines from the cast are good enough to elicit laughs.

Aside from that, the visuals are good enough but I guess you'll get overload of green but not in a super bad kind of way. Ryan Reynolds is smoking hot and is really tailorfit for this superhero. His scenes where he is on boxers/undies have elicited wows specially from the female and gay audience. So as his love interest in the film Blake Lively who is equally scorching and sexy. While most of the people feel the battle scenes are not that many, I still loved every bit of it.