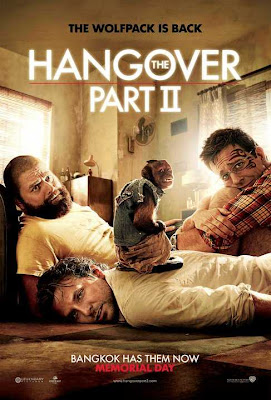 2 years after their chaotic yet super adventurous and fun escapade in Las Vegas, the Wolf Pack is once again back for more. The original cast of Phil (Bradley Cooper), Stu (Ed Helms), Alan (Zach Galifianakis) and Doug (Justin Bartha) reprise their roles and this time around travel to the exotic Thailand to attend Stu's wedding.

The initial plan was to have a simple and subdued wedding ceremony but instead it was once more chaotic and off the hook. The fun factor of this film has somehow diminished in comparison to the original film. Some of the jokes were also uncalled for and there are obviously scenes pointing out to racial discrimination, stature discrimination and even animal abuse. I am not digging most of the jokes and as I see it, the storyline is nothing new much like the original.

The actors did a decent job in terms of acting specially looking dumb and f**ked up. It sure has the same appeal as the first but I did not enjoy it by much. There was no element of surprise as the scenes are actually predictable. I loved Hangover 1, I still like Hangover 2 but maybe a 3rd one is not necessary anymore.