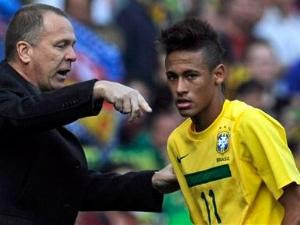 Neymar is a player who is being targeted by Real Madrid. But the 19-year-old player had refused the proposal of Los Galacticos. Neymar even though Brazil is not willing to leave Barcelona team-negotiable though.

Maradona heat that makes the ears is when Neymar boasted could exceed the ability of attackers Barca, Lionel Messi. This statement was immediately rewarded by Maradona with Pele's comments that come to attack.

"Neymar have the attitude that is not good as Pele," Maradona told TVE at the 25th anniversary of 'Goal Hand of God' are printed against England in the 1986 World Cup, Tuesday, June 21, 2011.

"Messi is a player who could be expected, and I doubt anyone could destroy it as the best player," added Maradona.

Maradona long as it's known not get along with Santos legend, Pele. Both are several times engaged in war of words in the media.
Posted by ROHIB at 5:00 PM