Nadal Had Difficulties in Round I Wimbledon 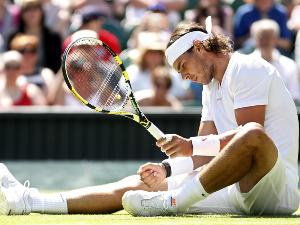 In the first set, Nadal's serve was broken. He left behind 2-4 before eventually winning 6-4.
Rafael Nadal made ​​it through his first match at Wimbledon 2011. The defending champion beat Michael Russell of the United States on game day Monday, June 20, 2011.

In the first set, Nadal's serve was broken. He left behind 2-4 before eventually winning 6-4. In the next two sets, Nadal perform better and won 6-2, 6-2.

"I was pleased with my performance. Especially in the second and third set," Nadal told the ATP Tour website.

Nadal admitted that at the beginning of the game, he had trouble finding a rhythm game.

"I started the game earlier with a rhythm that is too fast. But overall I'm playing good."