Well, PFW has surely made a lot of the headlines so far here in the metro and to have a breather of sorts, I'll post some items that has happened in the past week as well. 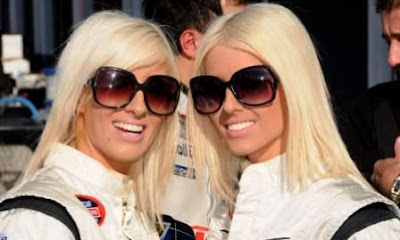 I'll start with an interesting one in the field of sports, specifically Nascar. I know, most people know only few stuff about NASCAR and maybe some of the guys only know Danica Patrick. Can't blame them she's pretty. But a there's a big buzz in the race nowadays as not only one but two ladies have joined the big guys in racing.

Making their debut at the Camping World Truck Series race last Saturday, the Cope twins have made headlines as the first twins to compete in NASCAR. Angela and Amber has been racing karts since childhood and has been also busying themselves with fashion.

And they are quick to point out that they are not just there to race but also to look great. Well, I don't know about that but they somehow showed they could race. In Saturday's race, Amber Cope, driving the No. 6 Dodge, finished 26th, three laps down while twin Angela Cope finished 30th a further 3 laps adrift.
Posted by ROHIB at 11:18 PM