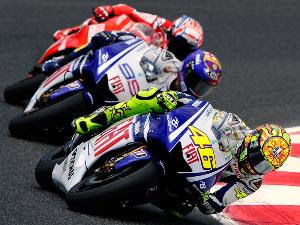 A number of interesting facts and data races in Estoril:

1. Jorge Lorenzo won the Portuguese MotoGP on the last two seasons. J-Lo's first win at Estoril in 2008 also became the first victory of the 23-year rider in the MotoGP event.

2. Pedrosa achieved 2nd position in 2007 was the first podium for Repsol Honda rider was in Estoril on all classes of their own cellular phones. Estoril is one circuit that has never won Pedrosa in the MotoGP class. Another is the Losail circuit, Aragon and Silverstone.

3. Casey Stoner has never won a race at Estoril in the MotoGP class, but reached the podium twice in 2007, position 3 and position 2 years ago. The only victory was achieved in Estoril Ducati rider was in 2005 in the 250cc class.

5. Andrea Dovizioso won three times the podium at Estoril during competed in the 250cc class (2005-2007), including victories in 2006. However, the Repsol Honda MotoGP rider is out of luck after an accident in 2008 and finish in seventh position last season.

6. Ben Spies (Monster Yamaha Tech 3) have not been seen in Estoril, but the rider from the United States is going to be a threat after ensuring his 2010 at the MotoGP Best Rookie Australia.

7. Position 4 in 2007 is the best result Nicky Hayden (Ducati) MotoGP at Estoril since followed in 2003. In the 2006 season Hayden failed to finish after falling over touched by his team mate, Casey Stoner on lap 5. Hayden 2008 season fell on lap 17.

Email ThisBlogThis!Share to TwitterShare to FacebookShare to Pinterest
Labels: MotoGP