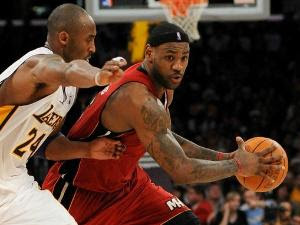 The battle between the Heat star, LeBron James and Kobe Bryant mainstay host became one of the attractions in this match. Several times James and Bryant was involved in the struggle for the ball. In fact, they had quarrels involved in quarter 4.
Posted by ROHIB at 11:42 PM