What a long weekend and start of the week! We went to Eastern Washington, Wenatchee to be precise, this last Saturday to buy fruit for canning directly from the farms. The trip takes 3 hours each way. The biggest obstacle is knowing where to go. So many of the older farmers are retiring and the younger generation just are not as interested in selling fruit to individual buyers. Fruit farming is aimed at big business and the personal relationship with the public is falling to the wayside. The thought of losing the chance to buy at the farms is disheartening because the whole canning process and trip has been a tradition within the family for over 40 years that I know of. My Grandma along with Grandma's neighbor, Walt Sands, taught me how to can over 10 years ago. Now, the journey feels like a hit or miss situation, where either I pay as much over in Eastern WA at a fruit stand as I would pay locally, or I will find that cute older couple still selling to the public. This past weekend was a combination of both. Larry and I met an 88 year old man, originally from Romania, and his 80 year old wife from Yugoslavia. The cute couple have been in the states for a little over 47 years and raised 6 children. His wife still climbs the ladders and picks peaches off the trees and he was wheeling around 40 pound boxes like they were empty. He was all of 5' 2" tall but a heart just as big, and boy does he know how to give advice along with his peaches! Good work ethics, how marriage life should be looked at, and knowing that life is not all sunshine were the morals of the day to go with those boxes of peaches. He sold me seconds, peaches ready to be put up immediately, 40 pound boxes for $3, and I bought 2 along with a fresh box of just picked peaches for $10. The buy was the hit of the day. The rest of the day did not go as well. I could not find tomatoes; found pears but paid $15 for a 40 pound box; did find Granny Smith apples for $10 a box; and ended up stopping and paying a fortune at the local, over-priced fruit stand on the way home. We were so tired that I just wanted the rest of what I went to get, tomatoes. I ended up buying 1 box of beefsteak tomatoes, 1 box of Roma tomatoes, and 1 more box of peaches. The final ticket price for the 3 boxs? Over 60 dollars. I was stunned. 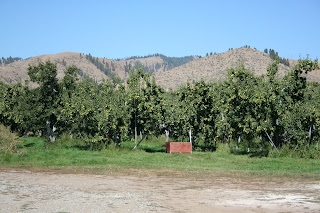 Here is an apple and pear orchard we stopped at. The branches are so loaded down with fruit that sticks were used for support.

On the way home, we took an alternate route and stopped at Leavenworth for a little wine tasting and shop purusing. Larry bought me the cutest little teacup and saucer. I collect them and use them...no, not for collecting dust, but actually drinking tea =). 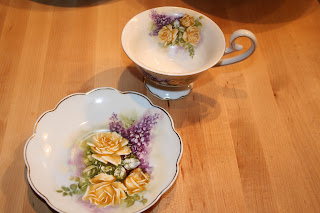 After leaving Leavenworth, we took a long, windy path that brought us to this man-made waterfall/dam. The dam has a pulley system to open hatches to let the salmon up river if the water is to high or the struggle is to hard for the salmon to head up the falls during spawning season. The water sounded so powerful and mesmerizing. Very easy to get caught up in just standing in the sunshine and watching the water swirl around itself. 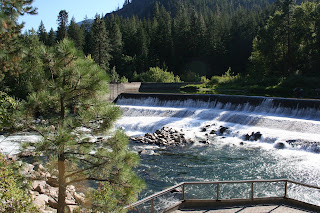 Getting home, all I could think of was getting the fruit in the house and relaxing. We left at 7:30 a.m. and did not get back home till 8:30 in the evening. I now have over 150 pounds of fruit to work up and the job looks HUGE. Every time I do this, I wonder what the heck I was thinking?

Would you believe I did not even touch the fruit Sunday? I played in the yard, weeding, thinking I had plenty of time for the fruit to get ripe and I must have completely lost my marbles because I have 80 pounds of seconds for peaches. When I discovered my error, it was Sunday evening and I was looking at some seriously ripe fruit! I had to get up at 4 a.m. for work Monday and would have to wait till I got home from work to start. I was hoping for a miracle.

I am laughing while I say this but my weeding marathon showed progress. 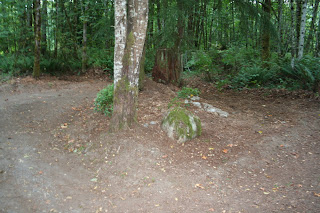 The above photo is me taking back what nature is tenaciously battling me for...the front of the property. We have cedar stumps that were originally chopped down by axe and the stumps are still solid underground. We had some removed and they weighed over 10,000 pounds each. I am slightly stubborn when I get a plan in my head and I refuse to lose. Ground cover will now be my new friend.

I also discovered that I have had a rogue chive plant for who knows how long, growing in a pot off to the side. I practically tripped on it. 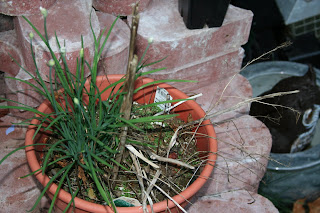 I think the plant looks pretty good for never having been watered by me. I am keeping it just because we seem to be a lot alike. 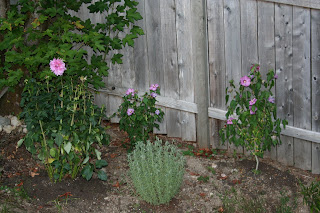 My Dahlia, lavender, and the bushy things against the fence, my mind just went blank - I'll think of it later, probably as soon as I hit the publish post button, are looking all freshly weeded. I can not believe Fall is staring at us.

I get home from work Monday thinking what would be the fastest process for the peach canning project? I was thinking about making peach pies ahead of time and freezing the pies, then popping the pies out of the pie dish and inserting frozen pie in a ziploc gallon sized bag. The scenario is too long BUT just making a peach filling to go into a pie shell at a later date is NOT! This is how I came home Monday afternoon. Jumping on the worst peaches first; cutting bad parts off the first 40 pounds, boiling water, dropping peaches into the hot water, then the ice cold water, then peeling. Peach juice everywhere. 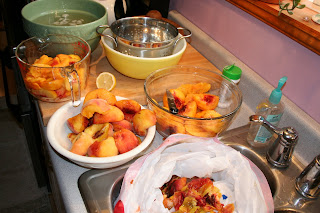 Pie plates were scooped out of the pantry and peaches were sliced and mixed with ingredients listed below, poured into pie dishes and set into the freezer. I still need to pop the fillings out of the pie plates and put them into ziploc freezer bags along with directions for the pie crust and baking times. 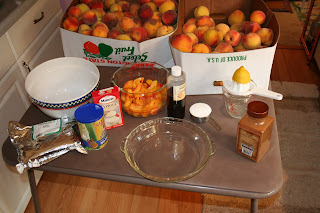 Place sliced peaches in a bowl with sugar, cornstarch, tapioca, cinnamon, vanilla and nutmeg. Toss until evenly coated and sugar is mostly dissolved. 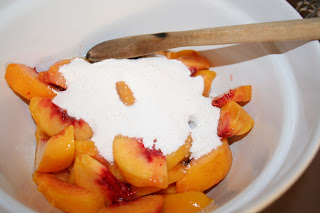 Transfer peaches to a 9 inch foil-lined pie plate. Cover with another piece of foil and freeze immediately to prevent peaches from discoloring. Once frozen solid, remove peaches from pie plate, with foil, and transfer to a zipper locked plastic bag for later use. When ready to use, line a pie plate with prepared crust and place frozen peaches on top.

Bake in the preheated oven on the bottom rack for 20 minutes. Lower heat to 350 degrees F (175 degrees C) and continue baking for another 30 to 35 minutes, or until completely warmed through. 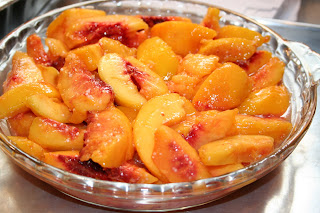 I sprayed my pie plate with Pam before adding peach mixture instead of using aluminum foil. 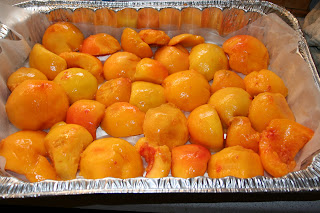 Peaches were spread out in a single layer and frozen. Later, the peaches will be put into a food saver bag, air sucked out, and put back into the freezer.

I also canned 13 quarts of peach halves in a light sugar syrup. A photo will be added later. I went to bed exhausted but 50 pounds of peaches lighter.