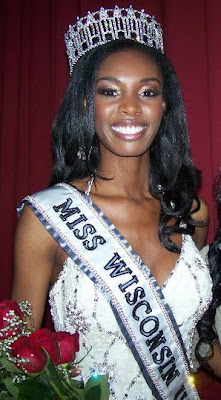 Shaletta Porterfield won the Miss Wisconsin USA title last year but resigned Friday after being charged in Dane County last month with three counts of misappropriating identity information to obtain money. She has entered not guilty pleas and the case is set for trial in July.
Porterfield, 26, apparently told police she had faked signatures of three business owners on contracts for advertising with a marketing company Porterfield was working for last summer, the Waunakee Tribune reported. When the businesses were asked to proof ads they hadn’t agreed to buy, or paid for, they got suspicious and called police.
Her attorney, Robert F. Nagel of Madison, said Saturday his client acknowledges her mistakes and expects to resolve the charges with a deferred prosecution agreement by early July if not before. He said he doesn’t believe she actually gained any money from her actions.

He said Porterfield, who has no prior record was under a lot of pressure at the marketing company to make commission goals and left its employment in August.
“It’s unfortunate, but she has a lot going for her, and she’s ready to move on,” Nagel said. He said Porterfield relinquished the Miss Wisconsin USA crown to avoid any possible embarrassment to the pageant.

Porterfield’s relinquished title is not be confused with Miss Wisconsin, a different pageant whose winner goes on to compete for the title of Miss America.


Special thanks and credit to beautypageantnews.com
Posted by ROHIB at 7:41 PM