MOVIE REVIEW: PIRATES OF THE CARIBBEAN: ON STRANGER TIDES 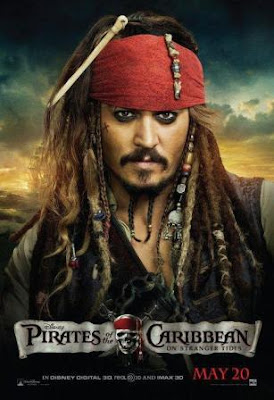 In the film industry where franchises are usually made to fail sometime, Pirates braved the storm to start anew with its 4th movie of the series. After a successful trilogy which stars Johnny Depp, Orlando Bloom and Keira Knightley and from which director Gore Verbinski is on the helm, the new Pirates presented us with new possibilities - a new director, a new cast and a new world to conquer.

On Stranger Tides bravely moved into a somewhat fresh start. With Rob Marshall taking the directing chores from Verbinski and Bloom and Knightley not part of the cast, it was sure a giant task to put the new Pirates afloat together with the first 3 films. But it successfully did. I feel that the real charm of the Pirates franchise really lies with Johnny Depp's portrayal of Capt. Jack Sparrow. As usual he was funny, cunning, brave and even sometimes quite annoying in a good way. He has somehow mastered the part making us believe that Jack is for real. The addition of Penelope Cruz is a welcome plus to the film as we see her character and Depp's character often collide with each other. The action sequences, visuals and sounds were again off the hook. The new world presented is actually a good one to explore. And with the love interest going with Jack and Angelica plus the true emotions involved with clergyman Philip (Sam Claflin) and mermaid Syrena (Astrid Berges-Frisbey), it seems the new Pirates have somehow soften up and focused more on human emotions.

I still miss the old gang with Bloom and Knightley but this film is note-worthy on every piece of it. Not as flashy as the first 3 films but still a wonderful experience and a welcome addition to the Pirates franchise. Still a 5 out of 5 popcorns for me.
Posted by ROHIB at 12:53 AM