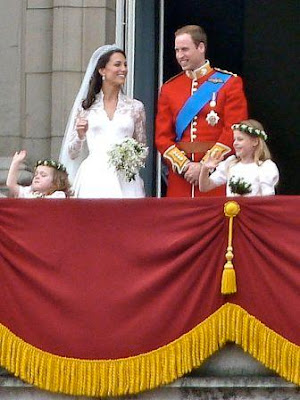 All people were glued to their TV sets or are watching feeds from the net or keeping track of their twitters and facebook as we all witness the wedding of the year and possibly the decade.

Friday 29 April 2011 at Westminster Abbey, Prince William and Catherine "Kate" Middleton has officially tied the knot and exchanged their vows in front of thousands of people who kept their eyes on the biggest worldwide event for 2011. Dubbed as the Royal Wedding of 2011, news were all over for most of that day and even the succeeding weeks. The newlyweds now most commonly known as the Duke and Duchess of Cambridge were a picture of happiness and ecstacy. The couple were all smiles on the entirety of the wedding ceremony.

What I liked about this wedding is how simple the gown of Kate was. Simple yet elegant and chic. Didn't I mention about the diamond studs. Man, they were many. Kate kinda remind me of Princess Diana back then with her ever simple and down to earth attitude coupled by the great smiles. And another talk of the town were the head dresses and head pieces worn by the lady guests during the event. They were all there raning from lovely, eelgant and even some tacky.

It was indeed a remarkable world wide event. And while the world was tired of the bad news on calamities, economy and corruption, it is a pleasant news to have a story of great love be shown to everyone.
Posted by ROHIB at 1:18 AM

Email ThisBlogThis!Share to TwitterShare to FacebookShare to Pinterest
Labels: WORLD