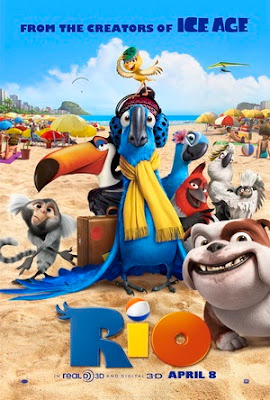 "Rio" was not one of my most anticipated movies for the year. I don't know but there was hesitation in me to watch a cartoon about birds. But I guess when I saw the trailer, I told myself that I'll give it a try. And good thing is I did. Because you know, it is one of the better films of 2011.

"Rio" has fun spelled all over it. It's not just a fun movie but also a movie about self discovery and emotions. We are taught here that we need to spread our wings for us to fly or else we would be stucked at where we are. Belief in one's abilities and talents is one main point of the movie. And aside from its good story base, "Rio" succeeded in having a stellar voice cast. Blu as voiced by Jesse Eisenberg was superb in his portrayal of the oftentimes afraid and naive bird. Anne Hathaway as Jewel was convincing in all aspects as she played the domineering and strong willed character in the film. A wonderful support cast that includes George Lopez, Will.i.am and Jamie Foxx added to the brilliance of the voice ensemble.

Another great thing to note is the great soundtrack and visuals this film has to offer. The energy and the vibrance can be felt so much that one thinks he/she has experienced Rio De Janeiro even if he/she hasn't yet. For all that it's worth, this film is truly something to watch. 4 out of 5 popcorns!
Posted by ROHIB at 6:25 AM