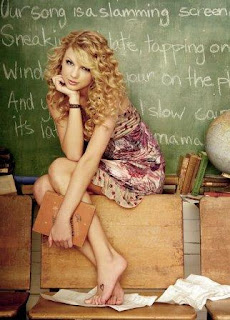 Yup, you heard it right. After fans went gaga with the news that country singing sensation Taylor Swift is coming to Manila, news bombed out that the concert is indefinitely cancelled stirring a lot of upset fans.

The supposed concert by Swift dated on October 22, 2010 at the Araneta Coliseum won't happen - at least for now. Fans would have to wait for further announcements on the new date of the concert. This is based on statements made by Renzie Baluyut, president of Divan Media who is organizing Taylor’s upcoming concert here in Manila. It also created a lot of buzz as we all know that 7/11, partner of Divan Media for the event had launched several campaigns for free tickets to the said concert. As of date, all the campaign posters have been removed from all 7/11 establishments across the metro.

The postponement is said to be linked to the release of Swift's new album. "Speak Now" will be her third studio album and set to be released in October.
Posted by ROHIB at 7:30 PM