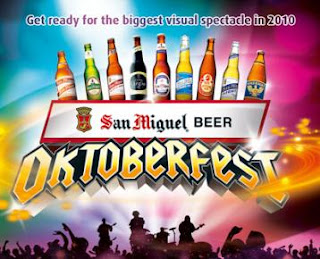 Year in, year out, the Philippines has been one with the rest of the world in celebrating "Oktoberfest". it is an annual celebration filled with beer, booze and alcohol - whatever you may want to call they or whatever drink you prefer. It is the season of merrymaking and getting a lil' bit tipsy.

As usual, the country's biggest brewery, San Miguel Beer has again made the forefront for the celebrations across the metro. The San Miguel "Oktoberfest" which actually has its launch last September 10 is a series of events culminating into the month of October. A lot of performances from different acts and bands are scheduled to the enjoyment of the Filipinos - beer drinkers or not. The San Miguel Oktoberfest will be highlighted by a light and sound show that they say would parallel those of  New York, Paris, London, Sydney and Tokyo.

In line with this, SMB is also introducing a new promotion with their beers. Bannering thier world-class quality and taste, all of San Miguel’s 8 multiple award-winning brands of beer, namely: San Miguel Pale Pilsen, San Miguel Premium All-Malt, San Miguel Super Dry, Cerveza Negra, San Mig Strong Ice, Red Horse Beer, San Mig Light and Gold Eagle Beer will be poured on all events across the metro. Added to this one is a new brew specially made for this event. The brew named "Oktobrew", their first ever all-malt light beer.

So prepare those bellies for more and more drinking this October.
Posted by ROHIB at 1:47 AM