, won with a score of 3-1 over Lithuania 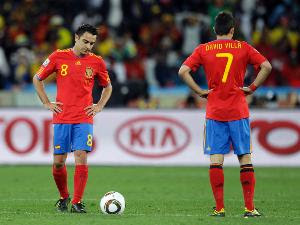 Defending champion appeared dominant during the Euro 2008 play against Lithuania in Euro 2012 qualifying Group I at the Zalgiris Stadium, Tuesday, March 29, 2011. Spain won with a score of 3-1.

It did not take long, Spain beat host. When a new game to run the 20th minute, Xavi Hernandez scored the goal guarded by the host goalkeeper Zydrunas Karcemarskas.
Posted by ROHIB at 4:00 PM