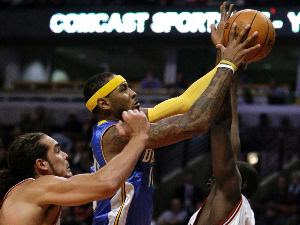 Magic continues to suppress the host through the action center Dwight Howard who appear charming. Howard scored 29 points and 18 rebounds. However, the star was actually Anthony who scored the highest score since joining the Knicks. Packing Anthony 39 points, 10 rebounds, two assists and a steal.
Posted by ROHIB at 1:01 AM