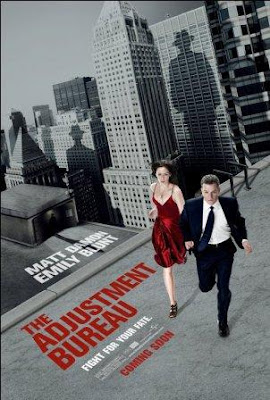 The first quarter of 2011 has been generally a down season for US box office with lackluster ticket sales and mediocre performances for most of the films shown. But it does not mean that there were no good ones shown.

One of which is "The Adjustment Bureau". The film brightly combines the elements of science fiction, thriller/suspense and love story in one. Matt Damon aptly plays David Norris a politician who got entangled in this bizaare world of fiction and love. He must now not only fight for his prestige, credibility and life but also fight for his love. Emily Blunt joins the cast and serves as the leading lady to Damon's character. Both were convincing and the sequences were rather riveting and impulsed. But I have a mixed feel on this film. It is like a combination of "The Box" and "Inception" plus a bit of a James Bond feel on it.

The film succeeded in delivering its message that we should fight for our own fates. We are the masters of our lives and only we can do what we truly want. It is not for someone to decide on what we choose and what we venture into. Fight for what you really want and see what's after that.

The Adjustment Bureau was nice although not spectacular. 4 out of 5 popcorns.