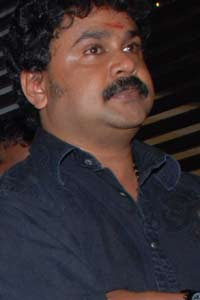 Debutant director Thomson has shot a song featuring forty TV stars for his new film ‘Kaaryasthan’. The movie featuring Dileep as the hero took three days to complete the shoot of this colourful song ‘Vaa Kuruvikale’ set to music by Berny Ignatius. Apart from the TV stars, playback singers Biju Narayanan, Afzal and Rimi Tomy also appear in the frames of this song.

The song is presented in a scene of the marriage of one character, a leading TV artist Abbi George, where Krishannuni, the ace taker of Puthezhathu Veedu (character played by Dileep) also arrives to convey his wishes. When Krishnanunni starts to hum a few lines, all the stars arrived for marriage jump out to a song and dance sequence. This is the first time in Mollywood history where forty popular stars are featured in a single song.

It may be also of interest to note that Dileep had appeared in forty different costumes for a song in his previous hit ‘Pappy Appacha’.
Posted by ROHIB at 1:59 AM