Who Makes the Best Fried Chicken? 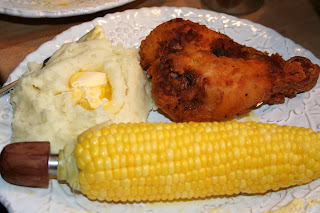 We are on a plane flying down to my parents last August. The carry-on bags are packed full of reading material . . . okay cooking magazines to share with Mom and 1 Newsweek. Reading recipes seems Ho-hum (I know, shocking!!!!) so I open up the Newsweek and a Revelation happened. My Nemesis appeared in BOLD letters: The perfect fried chicken debate! The perfect fried chicken has eluded my kitchen and I have almost given up . . . until Newsweek . . . offering a brilliant solution for those of us still searching!
The article in question:

Click on the recipe title and you will be taken directly to the article that opened my eyes to a whole new definition of Southern Fried Chicken.

The debate, put in a nutshell, comes down to a battle between two cooking giants: The late Edna Lewis and the all-amazing chef Thomas Keller. Chef Thomas Keller " . . . is the only American-born chef with two restaurants (The French Laundry and Per Se) awarded Michelin's highest rating (three stars)." (Newsweek, 2009)

Edna Lewis is a well-published southern author out of Virginia who is known for her award-winning recipes.

The debate is between chef Thomas Keller's Ad Hoc Kit (for the perfect fried chicken)- SOLD AT WILLIAM SONOMA STORE or ONLINE for only 14.95 (if bought online, you will pay slightly more for shipping) and has been proclaimed by "New York Times restaurant critic Frank Bruni . . . as nothing short of "phenomenal" (Newsweek, 2009) 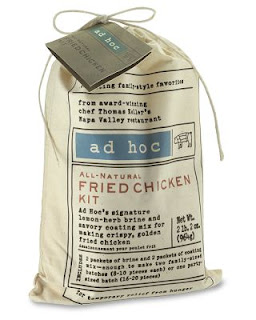 The kit contains:
Two packets of brine and two packets of flour coating.
Each packet brines or batters 8–10 pieces of chicken; all four packets can be used to create a party-sized batch of 16–20 pieces.
2lb. 2 oz. total. 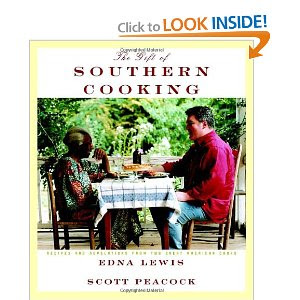 The revelation: Both chef Keller and Edna Lewis BRINE their chicken! I have never done this but what a great way to not only create tender poultry but inject layers of seasonings. 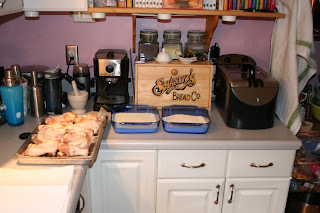 After brining overnight (using the Ad Hoc kit), the chicken is rinsed, dried, dipped in dry batter, dipped in buttermilk and re-dipped in the dry batter mix and fried at 320 degrees for 13 minutes. 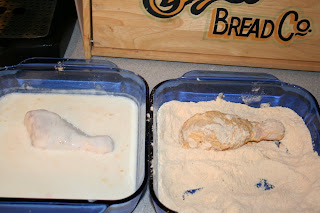 Creating multi-layers of season packed flavor and moisture with a crispy crust. A person could easily just nibble on the crispy crust and be happy. 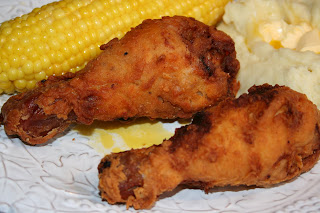 Edna Lewis is next on my list to try but chef Keller gave me a new way of approaching fried chicken. The seasoning mixtures in the brine opens a whole new thought process for infusing flavor and now I am obsessed with fried chicken once again. Thank you Newsweek for printing an article that helped re-direct and inspire my mind in the world of cooking.

In addition to the fried chicken, the time has come to use another baking concept. Pre-made peach pie fillings. Last summer, 30 pound boxes of peaches were purchased off farms in Eastern Washington for canning purposes. Some of the over-ripe peaches were not fit for canning. These peaches were trimmed up and mixed with ingredients for pies. I froze the peach pie fillings in pie plates and once frozen, popped them out of the plates and inserted the fillings into Ziploc bags for future use. Now, all that was needed was to make a pie crust, pop the frozen filling in the crust, add a streusel and bake. Easy! 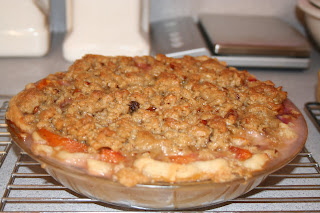 The pie was pretty juicy but the flavors were wonderful! 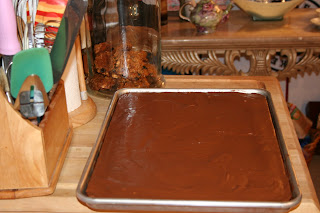 My daughter, Ashley, was going on her first real job interview today so I decided to also bake her favorite sheet brownies with a milk chocolaty frosting. Whether the interview went good or bad, she would have brownies. Ashley was offered the job so the brownies were part of her celebration!