As Promised - The First Peek at my Weekend at the Lake 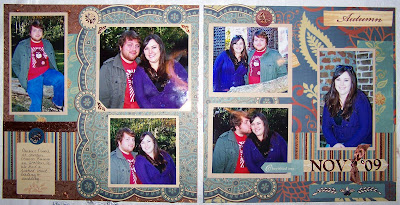 Here are the first two layouts from my weekend at the lake - both layouts feature my older son or his activities.  The photo above and immediately below are of Aaron and his sweet, sweet girlfriend.  I used SEI Moravia paper, including one of the shaped pages in the kits.  I cut the shaped page in half-ish (60/40) and used part on each of the two pages.  I love this set of papers, they are so rich looking and they worked wonderfully for this late fall photo shoot. 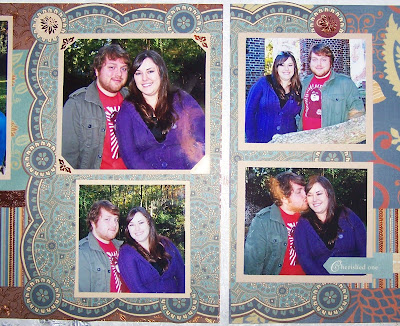 The next two photos are from the Fleetwood Mac concert layout that I did for my older son.  Aaron, his girlfriend and his roommate saw Fleetwood Mac in Charlotte sometime last summer.  They came home with lots of photos of the band and no photos of the themselves.... Insert a big sigh here if you are a scrapping mom. 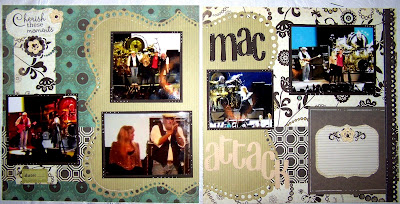 These two pages were scrapped on Crate paper that I purchased at last summer's scrapbook convention - also in Charlotte.  I love this set of paper - the colors and the shaped cuts area wonderful.  There were lots of embellies included in the kit, but I suplimented with those by adding my own crocheted flowers and brads.  I think the flowers match so well that they look like they came with the paper!! 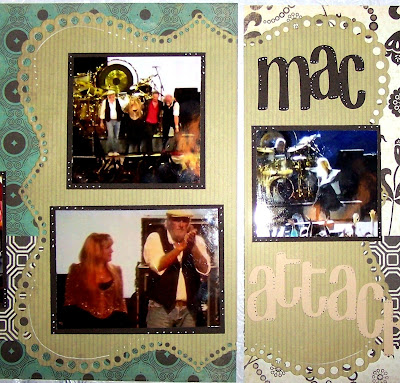 I photographed several layouts as well as a new craft technique on which I have spent two afternoons this week.  I will share more on that later in the week.....   Yes, that is a tease to bring you back!!!!
Posted by ROHIB at 9:21 PM