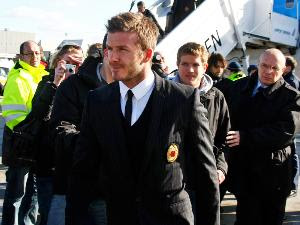 Invitation to David Beckham returning to England sod came from Everton. Through the manager David Moyes, Everton have declared themselves ready to accommodate players who are now defending the LA Galaxy in the United States.

This invitation came after Everton are likely to take the player for the LA Galaxy on loan. Players who will be borrowed by the previous possibility of Landon Donovan also been joined in the Liverpool derby club. But Moyes insisted not meinginginkan Donovan, but his team mate, David Beckham.
Posted by ROHIB at 11:26 PM