In yesterday's introduction to the Holiday Traditions series, I told you that our first guest would be Kimberlee of Brown Button. So without further ado, I give you the fabulous Kimberlee... 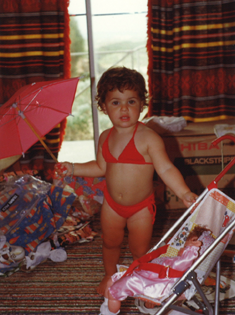 My first and last time in a string bikini!
What were your family's holiday traditions when you were younger? What was a typical Christmas Eve/Christmas Day for your family?

We always had a fresh/live Christmas tree- it would 'magically appear' one morning when we woke up in the weeks leading up to Christmas Day. We used to live across the road from a creek, and, as it turns out, father dearest would go over the road, in the depths of the night, and saw a 'limb' off a tree that 'magically' became our Christmas tree. 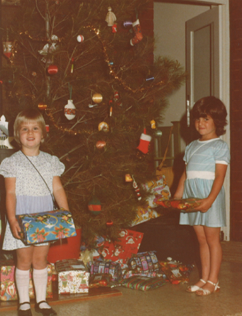 My sister and I with our 'magic' Christmas tree- 1984
For the first 16 years of my life, our family lived in a very small country town called Burra, about an hour and a half from Adelaide, the capital city of South Australia (SA.) My father is the youngest of three boys whom lived with their families in Adelaide, along with other extended family and my grandparents.

My mother is one of five siblings whom all reside in Brisbane, capital city of Queensland (QLD.) Given that mum's side of the family was a three day drive (or a 2 and a bit hour plane trip) away, we either spend Christmas in South Australia or Queensland. It made it easier in a way, we could just go to one spot and stay as opposed to have to rush between families.

Our trips to Brisbane were quite sporadic when we were younger, so the majority of our Christmases were in Adelaide. Usually Christmas Eve, we would drive to Adelaide just in time to watch the Carols by Candelight on television.

My sister and I would leave a pillowcase at the end of our beds for Father Christmas to fill (we weren't stupid, you could fit a lot more in a pillowcase than you could a stocking...) Christmas morning would be first spent at Church, then home to open Christmas presents. 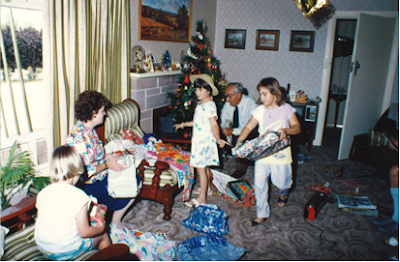 Handing out the presents in 1986. That's me in the scary straw hat and 'sunglasses' dress.

Families would take it in turn to host Christmas Lunch and long trestle tables would be set out for lunch. 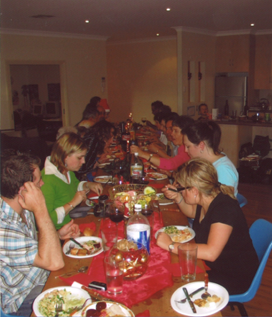 2005. Me scoffing my face closest on the right in black.
Then a nap, playing with gifts, cricket or football in the streets with cousins would occur in the afternoon. Christmas evening would be spent eating what was left over from lunch if you weren't still full from lunch (not that that ever stopped me...) My late grandfather had a great love of photography, so a group family shot would also be taken. 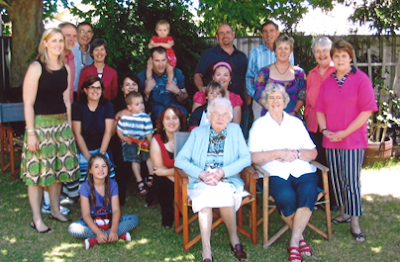 Christmas 2007. Shot of "Brown" family and a few "Smith" ring-ins who were in SA for Christmas that year. Christmas was at Mum and Dad's house. 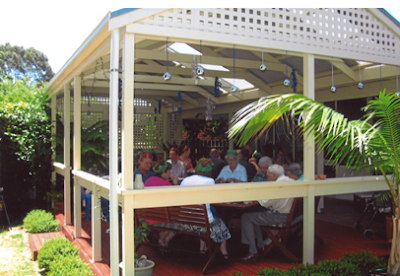 Did you/Do you leave treats for Santa? If so, what were/are they?

Traditionally, I believe, many Australian children would leave beer and biscuits for Santa (strangely enough always the beer of choice their father enjoyed...)! My parents don't drink, so we always left milk and a biscuit. I think a sweet kind of biscuit.

Have your family traditions changed since you have gotten older?

While our trips to Brisbane for Christmas were quite sporadic when we were younger, a more regular tradition of alternating between SA (Brown family) and QLD (Smith Family) has occurred in recent years. Every other year we head "North" for Christmas with the Smith side of the family in Noosa. This year we will be in Noosa.

My parents, sister and I moved to Adelaide 12 years ago, so the tradition of driving up and staying with my grandparents is no longer. I spend Christmas Eve catching up with friends at a local pup, and, if I'm in a suitable state, I try to go to a midnight church service with my parents. No gathering around the Christmas tree opening gifts as we are all grown up now, but as my cousins are now married with children, I wouldn't surprised if that begins again soon.

Have you implemented your own traditions into your life since you've gotten older?

Sadly, no. So I think I'll do something about that next Christmas! I always attempt to catch up with friends in the lead up to Christmas (any excuse to get together and have a drink!) and if I'm in Adelaide, Christmas Eve is spent at pub with friends.

Adelaide is a small city and a number of pubs around town are traditionally the pubs where people go for Christmas Eve. Line ups being around lunch time to get into these particular pubs. Lucky for me, I live next door to one of the "Christmas Eve pubs" so I can keep an eye on things and head over before the line ups begin!

What foods do you feel are must haves during the holiday season?

CHERRIES! I always know it is nearly Christmas when I see cherries in the shops. It's summer in Australia, so all the fabulous tropical and stone fruit- mangoes, nectarines, peaches, apricots, and pineapples.

What is your typical Christmas meal?

It can often be dreadfully hot on the actual day, so a full hot traditional meal is a bit impractical. If we are in Adelaide, it has traditionally been cold meats and salads, but in recent years, we have cooked lamp, pork, chicken and beef on the weber and had that with salads. In Queensland, it is freash seafood, mangoes, champagne and more champagne.

Dessert usually includes lots of fabulous fresh fruit, pavlova, and Grandma's fabulous Christmas Pudding with brandy custard- it is one of my favorite all time things (which is really ironic given that I HATE sultanas) The last couple of years, my sister has assisted Grandma prepare the pudding in the weeks leading up to the day. Memories I'm sure my sister will treasure forever. 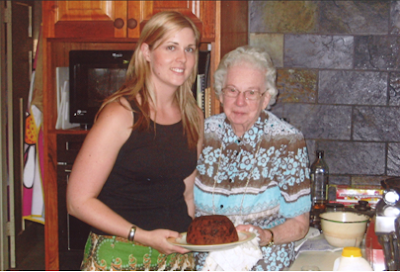 My sister and Grandma with THE pudding

What is your Christmas decorating style? 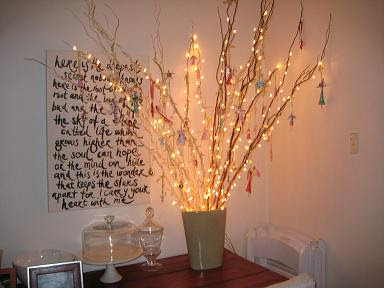 My Christmas tree this year
White or colored lights?

What is one holiday-related event that you must do during the holiday season?

Nothing specific, just catching up with family and friends.

Do you have a favorite holiday memory?

In the days when Father Christmas was still 'real' to me, I remember being sure that I heard him come into our room and fill our pillow cases full of gifts. Why? Because I heard the bells on the reindeer. It woke me up, and I lay as still as possible, desperately trying to keep my eyes closed. Years later, I realised what the 'reindeer bells" were. Dad used to wear a hideous pair of sandals (occasionally with long socks- eeekks!) and it was the buckle on his sandal making noise as he walked... 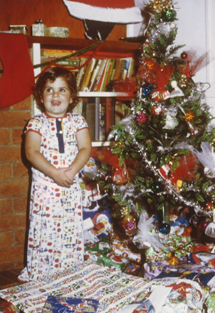 If you celebrate boxing day, what does that day entail for you?

It's funny that you say 'celebrate.' as I had to look up the origins if Boxing day to work out why we in fact receive a public holiday for 'boxing day.' Traditionally in Australia, it's a day spent watching the first day of the boxing day cricket test on TV or, if you are lucky, at the Melbourne Cricket Ground.

It is also the beginning of the Sydney to Hobart Yacht race leaving the great Sydney Harbour and people usually try to catch that on television as well.

Many families use it as a second 'Christmas Day' spending it celebrating Christmas with the other side of their families. I usally spend it with friends at a BBQ celebrating summer and the short break we get before heading back to work in the new year.

Complete this sentence- "It wouldn't be Christmas for me without..."

I have more Holiday Traditions to share with you and will be posting them during the lead up to Christmas, so stay tuned for more in the coming days!
Posted by ROHIB at 10:42 AM