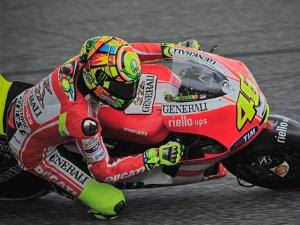 Mugello is full of good and bad memories for Valentino Rossi.
Valentino Rossi hoping some miracle when appearing at the Italian GP this weekend. This is the first time that The Doctor appeared in front of his own supporters since the move to Ducati.

Italian MotoGP race at Mugello Circuit significant importance to Rossi. Seven-times MotoGP world champion will play in his own country as a Ducati rider, who in fact is the Italian team.

Mugello is full of memories good and bad for Rossi. Had won seven consecutive seasons starting 2002-2008, Rossi last season suffered a serious injury in his right foot during training at Mugello.

This season Rossi had difficulty with Ducati. Only once reaching the podium from the last seven races, making Rossi lost the longest record in MotoGP. Recently a former rider of this Yamaha MotoGP victory in Malaysia last year, or 10 races ago.

Yet Rossi remains optimistic. Rider 32 years is known to always look amazing when performed in front of his own supporters. Rossi hoping to at least grab the podium at Mugello.

"The track is one of my favorites, and I always look good in there. Back after last year's accident was not a problem for me, because I enjoy performing here during a test," Rossi said as reported by Crash.net.

"I hope there will be spectators in large numbers and I will do it better than I have done until now because this is a very important race," added Rossi.
Posted by ROHIB at 6:10 AM