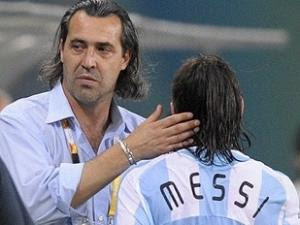 The failure of Argentina beat Bolivia in the first game Copa America 2011 Group A coach Sergio Batista did not make the change team strategy Tango. Batista will continue to use a 4-3-3 formation.

"The draw does not change my plans. I'll keep using the same tactics and we have the players to pass to the next round. So the first fight does not change our plans," said Batista was arrested after Argentina Bolivia 1-1, Saturday, July 2, 2011.

Against Bolivia in Ciudad de La Plata, Batista lowered Lionel Messi, Carlos Tevez and Ezequiel Lavezzi in attack in a 4-3-3 formation. Although mastering the game, but Argentina Bolivia difficulty penetrating the defense.

Batista hopes to adopt the game as Barcelona with Messi and Mascherano in the squad for Argentina. However, Batista admitted it is difficult to trace the pattern of the game Blaugrana.

"It is very difficult to play like Barcelona. Yes we are playing too hasty, the vertical game that we did not want. This should be changed in the next game," said Batista.

Batista assess a draw against Bolivia was a fair result for both teams. But, the coach who replaced Diego Maradona is hoping that victory in the next game against Colombia, Thursday, July 7, 2011 morning GMT.

Entertaining Bolivia, Argentina left earlier after the midfielder Ever Banega to an own goal during the third minute into the second round. Luckily Argentina equalized through Sergio Aguero the 76th minute. (ren)
Posted by ROHIB at 6:02 PM