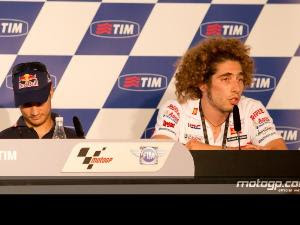 As reported by MCN, a different atmosphere has begun to be felt when Pedrosa Simoncelli and into the chamber press conference with Ben Spies, Casey Stoner and Valentino Rossi on Thursday, June 30, 2011. Although I know the dispute between them, the committee instead puts Pedrosa in the next Simoncelli.

Questions about an accident at Le Mans was inevitable. The accident itself makes Pedrosa should increase the operating table and was out for seven weeks in three MotoGP series.

"At Estoril (MotoGP Portugal) he had laughed at if anyone would catch it. The arrest was that he needed because the head of nothing else, except the hair," said Pedrosa Simoncelli quip frizzy hair.

Suddenly, without being asked his opinion, replied saying Pedrosa Simoncelli. "What he and his manager (Alberto Puig) talk about is the stupid things. Better not talk with him or his manager," Simoncelli said bitterly.

Simoncelli's not just a problem with Pedrosa. At last weekend's Dutch MotoGP, the Italian racer Lorenzo was also dragged in an accident and failing to make the podium. After the race, criticized the way the race Simoncelli Lorenzo considered sloppy and dangerous to other drivers.

Email ThisBlogThis!Share to TwitterShare to FacebookShare to Pinterest
Labels: Pedrosa-Simoncelli