I think in response to a recent post here at the Bat-Blog, about Batman Tattoos, I got these in the mail from 2 different Bat-Fans. The 1st one is our new friend Jake. He got a Vintage 1970's Batman Comic Book Logo on his arm, it looks great! This has always been a favorite logo of mine, good choice Jake & it looks really well done! The next pic is from a cool guy named Andy who said he saw a Dude with a Batman Tattoo & had to get a photo for the Bat-Blog. WOW! Thanks for thinking about us, that's awesome! Here's a cool Bat-Tat that is kinda weird but not really once ya know the story. The guy said he got this to remember his dog who recently died. His Dog's name was "Batman". I think that's really nice. Andy also said that the guy told him that the cityscape in the background isn't Gotham City but it's Chicago, IL. Thank you very much Jake & Andy for sending these 2 photos to us, I appreciate that a lot. I also wanna invite any other Bat-Blog Readers to feel that they can send pics anytime, anything Batman-related! Thanks Guys! 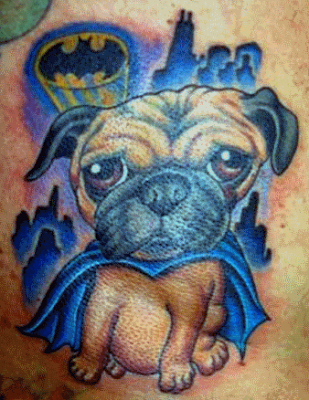