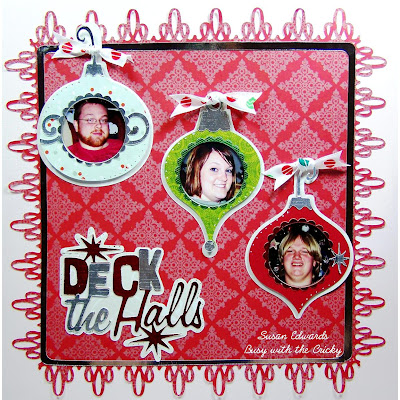 Happy Bitten by the Bug 2 Monday!  This week's challenge cut is a "two-fer".  My lovely design team sister Jeri selected a two part challenge, Ornament 1 or 2 *and* the Deck the Halls phrase from the Winter Frolic cartridge.  There were sooo many possibilities to use these cuts that I was almost overwhelmed by the challenge. 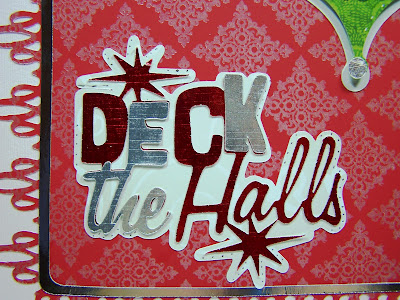 At first I designed a Christmas card using ornament 2 and the challenge phrase, but then I realized that I was in the mood for a layout.  My ventures in paper crafting began with scrapbooking and I still love to create scrapbook pages.  For this 12 x 12 scrap page I started with a blank base page of light, light pink cardstock.  To the blank background I added the cricut cuts and Christmas morning photographs of my children.

The Deck the Halls phrase cut was created with three cuts:  A smooth white cardstock shadow layer, a red metallic base layer, and silver metallic top layers.  I did not use all of the silver cuts because I liked the contrast of the red metallic on the white cardstock.

The looped edge full page was designed in Cricut Design Studio.  I placed the loop edge border from the Cake Basics cartridge, welding four sets of loops together.  I copied and pasted the row of loops until I had four rows.  Using the "Turn 90" degree turn button, I turned three of the rows so that the loops all faced outward.  I then welded the loops to a 9 inch round edged square from the George cartridge.  Using a full sheet of SEI paper, I cut out the loop edged mat. 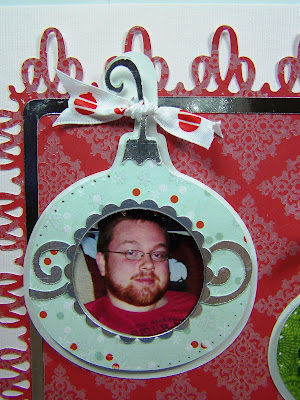 Next I cut out three Christmas ornaments, two from Winter Frolic and one from Joys of the Season.  I cut the shadow layer of all three ornaments in smooth white cardstock.  I used scraps of SEI, Bo Bunny, and Bazzill cardstock to cut the top layer of the ornaments.  A circle from George was placed inside each ornament, but was NOT welded.  The circles cut out and made windows for the photos. 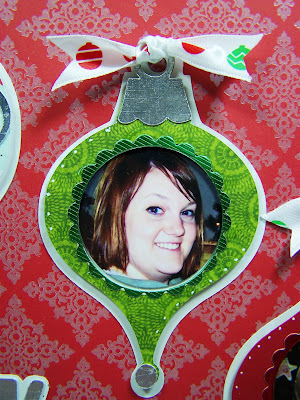 If you use the cut file - which is available to download from the side bar with the title "Deck the Hall & Ornament Layout" - you will see that there is one page which contains all of the metallic silver cuts.  I actually cut two of the scalloped frames on a different page so that they could be cut in red and green metallics.  They would have looked nice cut in silver also. I trimmed the top of each ornament with ornament print ribbon. 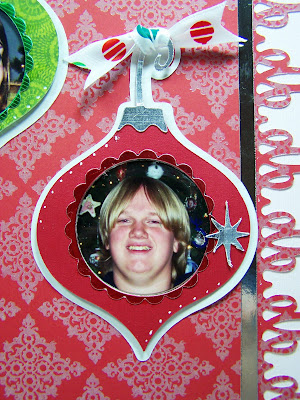 To assemble the page I began by attaching the looped matting to the light pink base.  I then added the large silver frame.  Next I affixed the Deck the Hall phrase into place.  And finally I added the three ornaments to the layout.

Be sure to go by BBTB2 and check out the amazing projects the created by the Design Team.  These women are FABULOUS designers!!!

You know, I am not sure that my children would appreciate that I placed Christmas morning photos on my blog for all the world to see, but I won't tell them if you don't!! 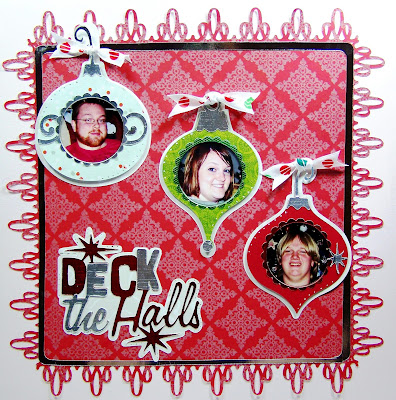