I promise I am moving on from apples, but I couldn't leave the topic without mentioning these sweet calling cards from Etsy shop Avie Designs. It seems so upper crust* to have calling cards, but these cards are certainly an affordable luxury with 48 cards for $12.50. 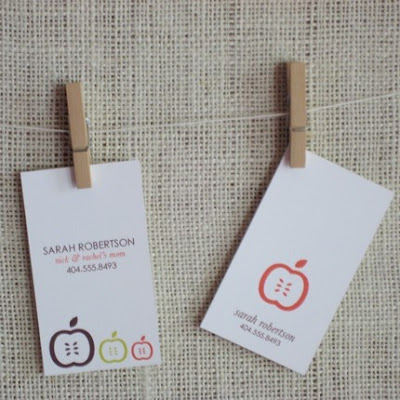 That's it. Moving on (well, at least for a while!)

*I couldn't help but love learning the history behind the phrase "upper crust." One of those phrases I had never given much thought to the origin, although it's probably not difficult to guess if you think about it. This handy fact come to us from U.S. Apple Association.

In early America, when times were hard and cooking supplies were scarce, cooks often had to scrimp and save on ingredients. Apple pie was a favorite dish, but to save on lard and flour, only a bottom crust was made. More affluent households could afford both an upper and a lower crust, so those families became known as "the upper crust."