The Land of the Delta Blues 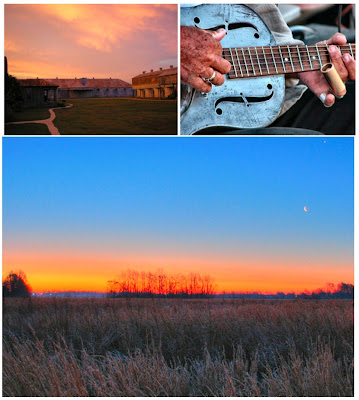 Top L to R: photo from flickr Cherry ElCamino, photo from flickr wicked_chasiti
Bottom Image from flickr SoundsGood
One of my best friends from college grew up in the region of Mississippi known as "the Delta." During those college years, our group made numerous weekend trips to her parents' house, where we were always warmly welcomed.

Consumption of hushpuppies, catfish, and other southern foods was de rigueur during our stays, and evenings always seemed to be spent drinking beers around a bonfire, sheltered by a circle of pick-up trucks. Those nights always felt as southern as I could imagine any being, and having arrived at school as a non-Southerner, I loved being there, surrounded by my friends, and feeling complete acceptance.

Perhaps because of the warm welcome I received I was inclined to see the good, but I instantly found charm and serenity in the scenery of the Delta. 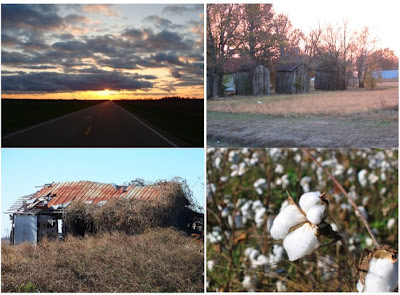 Top Row from L to R: photo from flickr jwinfred, photo by flickr Robert Pollack
Bottom Row: photo from flickr NatalieMaynor, photo by flickr Robert Pollack
The Mississippi Delta is a place with a troubled past; there has long been a disparity between the wealthy and the poor in this region, and poverty is wide-spread. Yet, there is also great beauty in this land and a culture that is rich and warm. 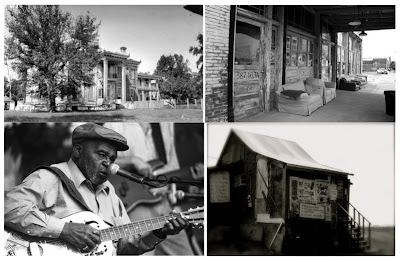 Top Row: photo from flickr jwinfred, photo from flickr Youri!
Bottom Row: photo from flickr Deltasly, photo from flickr MKBrock
From sorrow and hardship arose a uniquely American musical genre, the Blues; the Delta is infamously known for being its birthplace. This genre influenced and gave rise to many other styles of music, including jazz, bluegrass, and rock and roll. Juke joints dot the landscape throughout the Delta, and Ground Zero Blues Club in Clarksdale, Mississippi, owned in part by Morgan Freeman, is a larger establishment celebrating the music that was born here. 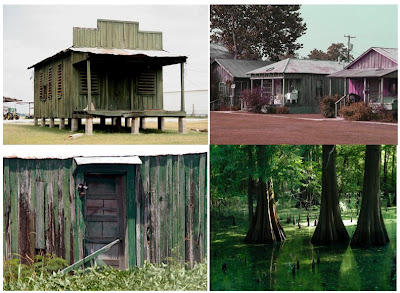 Top Row L to R: photo by flickr Frank Peters, Shack Up Inn photo by flickr stephee,
Bottom Row: Photos here and here by flickr jwinfred
Agriculture plays a key role for this area with fertile soil; cotton, soybeans, and rice are critical crops in the Delta, and catfish farms are also aplenty.

The Delta has much to offer visitors including a Viking Cooking School connected with The Alluvian Hotel and Spa, an upscale boutique hotel in Greenwood, Mississippi. In Clarksdale, in addition to Ground Zero, Morgan Freeman is also part owner of a fine dining establishment, Madidi. For those who want a unique lodging experience, just outside Clarksdale is the Shack Up Inn and the Cotton Gin Inn, both operated on the grounds of the former Hopson plantation.

If you make a trip to the land of the Delta blues, I imagine you will find a warm welcome awaiting.