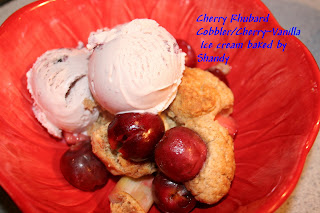 I had better get in my thanking Amanda from Like Sprinkles on a Cupcake now before I get off on memory lane. Amanda chose Cherry Rhubarb cobbler for the Tuesdays with Dorie Cooking Event found in Dorie's cookbook~ Baking From my home to yours ~ on page 415. This is my version of the recipe and WoW! did I improvise! Okay, okay, I followed the recipe to the "T" but with beads of sweat forming on my brow. Flashbacks of munching on Grandma's rhubarb to show the neighbor boys up were quickly coming to mind. You know, the girl has to show the MUCH older boys (I think they were between 2 and 3 years older then me), and I must have been all of 8 years old, that I could easily munch on a REALLY tart stick of Rhubarb. . .fresh out of granny's garden. . .and love it! David and Carl, the two boys, tried a bite and were much wiser for their age. They each quickly declined anymore and thought I was nuts. . .as I munched away, acting like the rhubarb was the best thing I had ever eaten in my life. I think I was nuts; especially when I received a hilacious tummy ache later that night.

Grandma had this wicked rhubarb plant that produced tons of rhubarb and she was always looking for a way to use everything. . .including lovingly sharing with us. . .I swear there was an evil grin involved somewhere. When Grandma wasn't looking, Grandpa would mow her beloved rhubarb plant down and this alien plant would grow back healthier and fuller then ever.

Grandma's horseradish plants were the same way. The memories still crack me up because Grandma would always pretend to be a little miffed at Grandpa, knowing the plant would come back and Grandpa would be the one really miffed. Then she would get these laughing jags on because Grandpa would be pacing around grumbling about how he was going to blast the plant out if he couldn't think of any other devious ideas without hurting his other favored flowers.

I still look at rhubarb as a fiend instead of a friend in the kitchen. Whenever someone I know talks about a delicious strawberry and rhubarb pie she just made, I am the one secretly grimacing over the rhubarb part. Well, here we are and Dorie put a twist on the ingredients. . .and I succumbed to the recipe over the thought of sweet, red cherries being part of the mix. Maybe this time. . . 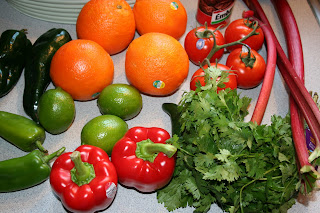 I totally forgot to take a picture of just the rhubarb and cherries before getting started. Everyone will have to make due with my picture of ingredients for my dinner that also involved a skirt steak for fresh fajitas and grilled avocado guacamole. There was an orange-avocado salad too. I just could not resist a picture with all the beautiful colors. 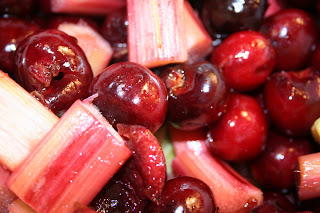 I could not bring myself to use 4 sticks of rhubarb. . .but I did use 3 sticks and would you believe I forgot how to peel the sticks? The vegetable peeler didn't even budge the tough exterior. By this time, I wished Grandma was still there to call and ask what the heck? I ended up taking a small start with a paring knife and just pulling the exterior off. The process was actually kind of fun. 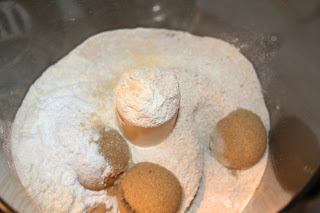 Dorie has been the first chef I have ever known that uses the food processor so much to mix ingredients and my KA mixer could just hug the stuffings out of her. I have a lot of fun using my food processor and really enjoy seeing just how versatile this machine is. Thank you for the eye opener! 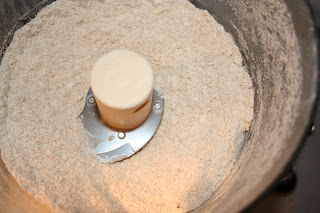 I am not sure, but I may have pulsed one time to many after adding the small, cold pieces of unsalted butter. My pieces are a little smaller then pea size. 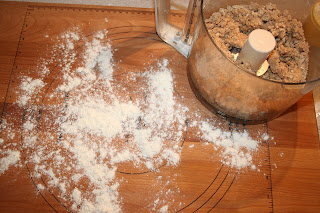 I was enthralled with the hearty color of the cobbler topping. An earthy brown and a sweet aroma that made me want to retrieve a small piece of dough to taste before getting started. I am really starting to enjoy the flavor of whole wheat flour. . .I know I mentioned this before but the idea is surprising to me. 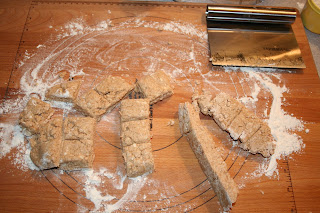 The dough was turned out onto a lightly floured surface. This is my version of "I can't wait to get this into the oven and see what the cobbler will taste like" so I went for the hurried look. 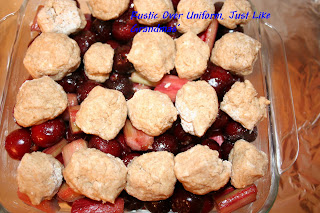 See? I told you rustic looking. My balls are not uniform but my Grandma would have been scoffing at me if I told here my dish needed to be just so. Hhhmm, come to think of it, so would my Mom! I think I would have been told that I didn't have to eat any then. The thought quickly shuts up any kid! 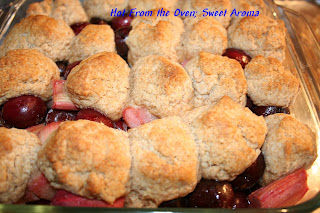 The color is a beautiful golden brown. What a contrast between the red of the sweet cherries and the rhubarb. I am still worried about trying this but the smell is so delicious. Using a clear 8 x 8 baking dish is always fun because a person can see the bubbles in the dish as it is taken from the oven. In fact, getting to see the filling and the topping is pretty great. Enhances the anticipation. 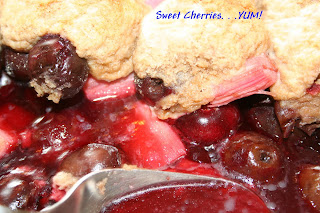 Hubby and I tried the first bite after waiting 19 minutes. We figured by adding the ice cream over the top, we could deduct a whole minute. You should try it. It works! Uhmm, I must have had a stick of mild rhubarb and 2 ornery sticks because the first bite was perfect. I thought I was over my nemesis. Second bite, nope, still there. The tartness was a little to much for me. Please don't get me wrong! The topping is one of the best I have ever tasted and I love almost all fruit but my past dumb childhood stunts has seriously damaged some tongue taste buds and I just can't get over the rhubarb taste. I really wanted this recipe to do the trick. I still like it, so I know anyone else would think the flavors are amazing! Thank you Dorie for adding this recipe to your wonderful cookbook! There are so many aspects to this recipe that can be adapted to other family favorites. =D
Posted by ROHIB at 10:05 AM