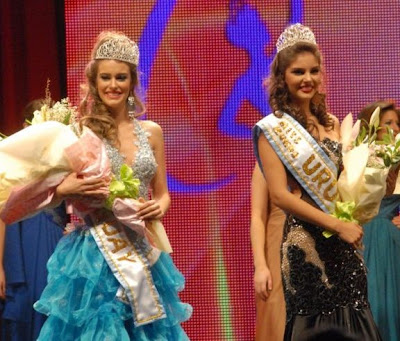 18-year old Fernanda Semino (L) was crowned Miss Universo Uruguay 2011 during the annual pageant held May 27th at the Conrad Hotel in Punta del Este. The 1.68 m beauty, who works as a print model, will represent the country in the Miss Universe pageant to be held in Sao Paulo, Brazil, next September.

Crowned as Miss Mundo Uruguay 2011 was Belen Sogliano (R), also 18 year-old. She is from Montevideo,who stands 1.70 m, will compete for the Miss World 2011 title in November.


Special thanks and credits to GlobalBeauties
Posted by ROHIB at 5:54 AM