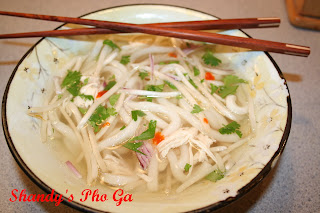 Pho; restaurants are popping up right and left in the Seattle area (outskirts included) simply advertising Pho. I have no idea what this is but when Larry asks me where I want to go out to eat in Seattle (after work), we think Sushi restaurant, steak and seafood house, casual, comfy yet slightly uppity bar, because we are hoping for a great bartender to go with great appetizers, but we never think: Oh lets go get some Pho. I have never even Googled it before. One of my co-workers said his wife and sisters love it and get it often. I just learned this the other day. I 'have' been curious for a long time (at least 6 months).

Jaden, amazing lady publishing an absolutely gorgeous new cookbook on Asian recipes (called the Steamy Kitchen), lists Challenge #1 (from her cookbook): Vietnamese Pho and Challenge #2: Chocolate Wontons (does not have to be chocolate but does have to be a dessert wonton).

Challenge #1 has a short version listed on the daring cooks site or a Daring Cook can go to Jaden's website for the longer version, choosing either the chicken or the beef Pho. Taking the short version never even crossed my mind. Of course I want to try the long version first, I have never even tasted this before. 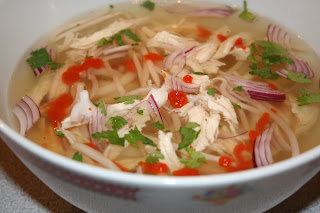 I will list the short version recipe here but to get the long version, you will need to click on Jaden's blog link.

The first thing to do is check list of ingredients and I was lacking star anise, also whole chicken. The choice was buy a full jar of star anise and pay a LOT or go to the bulk food section and pay about $1 for 8 whole star anise (encase I fall in love with the spice and want to experiment later). The choice was an easy one. Next, need whole chicken. Uhmm, I do not cut up chickens. We who live in populated areas have LOTS of stores with butchers and pre-chopped chicken. No, I want the long version with great flavor and exposed marrow. Greeeaaaattt! I am now buying a whole chicken. Everything else needed is already waiting at home. Take chicken home, pace, wait for Larry (hubby) to get home and ask him if he has a hatchet? His eyebrows literally raise to his hairline, pupils dilate and he wants to know if I am drinking or had a bad day at work? No, I am making Pho Ga. (Somehow this does not sound like a clean word when you say it fast like I did.) Again, he just looks at me. Asian chicken soup. And the hatchet? I need to chop the chicken up. Jaden says to expose as much marrow as possible. Why don't you use your cleaver? You know, the one that is attached to your magnetic knife strip and is collecting dust from you never using it? We will just keep the hatchet in hiding for now. Alright-tee. Do you want to chop the chicken up for me? I think I need to go work on the deck. Love you! and out he went.

Well, the ginger and onion was set under the broiler to cook until the skin was black on the onion and darkening on the ginger. Then I went to work on the chicken. I am so proud of myself now because the breasts were not that hard to cut off (since they are the largest pieces on a chicken but I did flip the chicken around twice to figure out which side they were on . . . not as easy as it looks) AND you get to use your new cleaver and chop the crap out of the chicken. The chopping was great! Plus I had Plenty of exposed marrow. 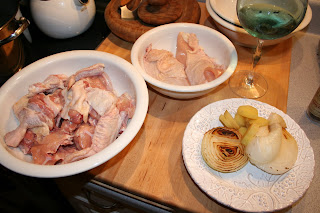 The hard part was getting a clear broth. I make homemade chicken stock all the time but I buy a bag made out of netting to put all the "pre-cut" chicken pieces in so there is not a lot of scum floating on the surface to begin with. I skimmed the scum and then the oils floating on the surface but the end result was still a slightly cloudy broth. 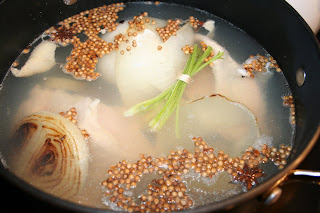 Udon noodles were already on hand so these were cooked up instead of flat rice noodles. Everything else was according to Jaden's recipe because I needed to know what the soup was suppose to taste like before I started playing around (WHICH I will be doing because I absolutely LOVE this soup). So much fun, delicious and interactive. The possibilities are endless and you just have to see for yourself by going to check out the other Daring Cooks alternatives to this recipe. I would like to state ahead of time that the Daring Cooks truly are daring and amazing! I do not need any more recipe variations from a cookbook. Just go to their sites and find all the varieties and ideas you could possibly ever want to try because they are out of this world unique, colorful, and FUN. 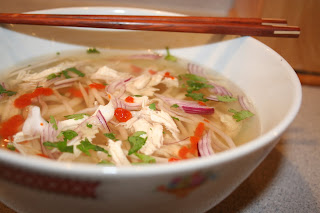 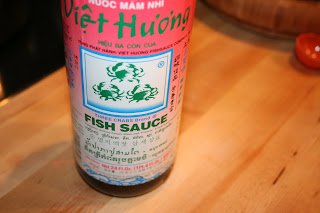 Directions:
To make the Chicken Pho Broth: heat a frying pan over medium heat. Add the coriander seeds, cloves and star anise and toast until fragrant, about 3-4 minutes. Immediately spoon out the spices to avoid burning.

In a large pot, add all the ingredients (including the toasted spices) and bring to a boil.

Reduce the heat to medium-low and let simmer for 20 minutes, skimming the surface frequently.

Use tongs to remove the chicken breasts and shred the meat with your fingers, discarding the bone if you have used bone-in breasts.


Prepare the noodles as per directions on the package.

Ladle the broth into bowls. Then divide the shredded chicken breast and the soft noodles evenly into each bowl. 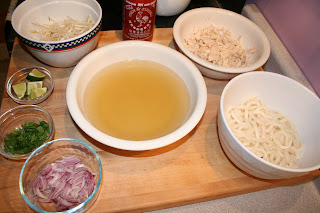 Have the accompaniments spread out on the table. Each person can customize their own bowl with these ingredients. 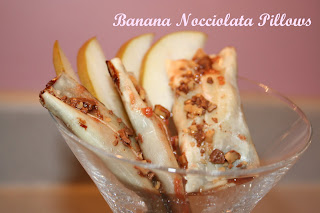 Challenge #2 will be short and brief (yes, the 2 words mean the same thing but I am winding down over the whole chicken thing).
I had a little trouble with the wonton dessert. We ended up taking a wonton wrapper, putting a dollop of Nocciolata (organic hazelnut spread with cocoa and milk) on the wonton, resting a banana on top of the dollop and folding the wonton to create a pillow shape. Seal edges with a finger dipped in water and bake for 10 to 12 minutes at 375 degrees F. 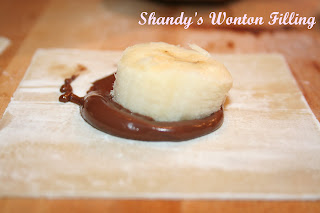 Let cool.
Glaze with my homemade, canned, spicy pear butter and sprinkle crushed toffee bits overall.
Baking the wontons was tasty but chewy. I was more impressed with chopping up the chicken. 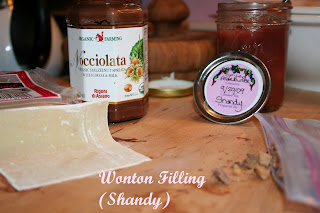 
Directions:
Place pears in blender or use a hand wand blender with pears already in pot to pulse till a little chunky.

Put all ingredients together in a heavy bottomed pot.Cook on medium to low heat for about 3 hours, the thicker you want it the longer you cook it.

This can now be processed in a water bath for 5 minutes. This means that you set your jars in the canner and lower the jars into the water, bring the water back to a boil and then time the jars for 5 minutes.

**The amount you end up with is determined by how much you cook the pear butter down.