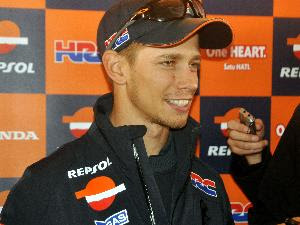 Stoner spent four years with Ducati before finally returning to Honda this season. With the Italian team, the successful Stoner won 23 races and became world champion in MotoGP 2007.

Stoner acknowledges its relationship with the Ducati is not harmonious, especially after the third season. Rider 25 years the rate Ducati did not appreciate it.

"Valentino came only because I did not renew his contract. The decision is in my hands. I go and they (Ducati) contacted him. They thought that Valentino can give great results," said Stoner told Gazzetta dello Sport ahead of the Italian GP.

"In recent years, it is not a warm relationship with Ducati. With the team everything went smoothly. It could be said with the people at the top," continued the rider from Australia.

Stoner admitted relationship with Ducati even worse when she should be absent in several series of the 2009 season because of illness. "At that time I realized that I was not really a family member of the team. I have a problem and they do not help me," said Stoner.

Stoner grateful to Honda decided to leave after playing outstanding this season. Italy entered the MotoGP series at the Mugello circuit, this weekend, Stoner still leads the standings.