We may not win every game...

In the center of The University of Mississippi's campus lies the Grove, a beautiful park full of trees. On any given day, you may find students sitting at tables and lying on blankets, reading, studying, and socializing. A stream of people pass through the Grove during the day, as they walk between buildings on campus, but, despite the traffic, the park retains an air of peace and calm. While the Square is the heart of Oxford, the Grove, especially on a home football game day, is the heart of Ole Miss.

This is the Grove 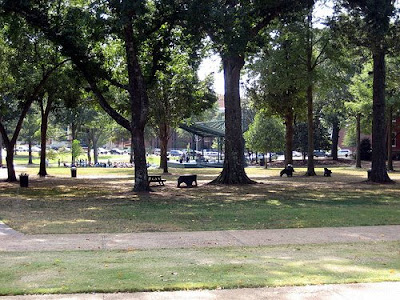 Photo from flickr flannel.gary
This is the Grove on Game Day! 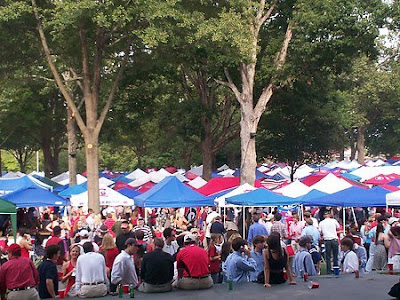 Photo from hottytoddyblog.blogspot.com
A favorite saying among Ole Miss fans is, "We may not win every game, but we've never lost a party." The Grove is where those parties take place on days of home football games, and the trees seem almost hidden by the tents that stretch as far as the eye can see (no cars allowed!) Shouts of "Hotty Toddy," the cheer and greeting used between Rebel fans, are heard frequently on football Saturdays.

Ole Miss fans have escalated tailgating to an art in the Grove. With elaborate food spreads in every tent, silver platters hold enough fare to serve the hosts and any guests who might stop to visit. Flower arrangements adorn tables covered with fine cloths, while candelabra and chandeliers provide lighting. None of this seems out of place against the backdrop, until you remember this is tailgating for a football game.

When I arrived at school as a freshman, I was unaccustomed to Game Day traditions. The unspoken requirements of game day attire baffled me completely; women wore heels and dresses, while men sported khakis and collared shirts. Dressing up for a football game? It sounded completely absurd.

On the day of the first home game that year, I found myself standing in a familiar place, yet staring at a scene that was completely foreign. The area I knew to be so peaceful and calm was suddenly overwhelming. I stared at the vast sea of tents dotting the horizon, and it felt as though the space had multiplied endlessly; finding a specific tent seemed a near impossible feat. I fumbled my way through that first hot Saturday, all the while cursing the blisters on my high-heeled feet.

After a few games, I realized that it no longer felt overwhelming to head to the Grove. Finding specific tents still proved difficult at times, but it was easier done with friends, and while I made my way through the maze of poles, I found myself taking in the beauty and unique atmosphere surrounding me.

I grew to love the fashion of game day; by the end of college, wearing jeans and sweatshirts to a game seemed as preposterous as the notion of wearing dresses and heels once had. The blisters? Those never seemed to get better. In all four years, no matter how comfortable the heels seemed, inevitably the end of a day spent "Groving" was met with searing pain in my feet. But I loved every minute of it. 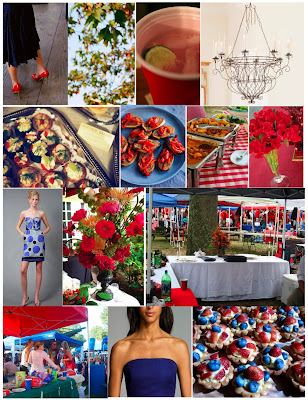 Email ThisBlogThis!Share to TwitterShare to FacebookShare to Pinterest
Labels: inspiration board, The Grove, The University of Mississippi