Pinzgauer Beef For the Freezer 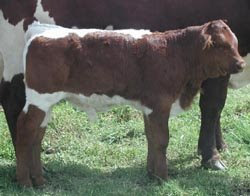 We live around a lot of farms and buying a half or quarter cow to have in the freezer over the winter is such a wonderful feeling. An abundance of hamburger, stew meat, and beef bones for flavorful stocks and soups is at my fingertips. I work with a plumber right now who raises Pinzgauer cows with his neighbor and best friend. Between the two farms in Centralia, WA, they have quite a few acres to raise their herd of cattle. This beef is suppose to be so much better then Black Angus for several reasons. One of which is that the meat is leaner. Less waste to fat when butchered and cooked. The butcher that Paul and Matt, the two cattle farmers/constructions workers, use has been butchering beef for years. In fact, Roger, the butcher, has been butchering beef for Paul and Matt's fathers, when the two were still toddlers. 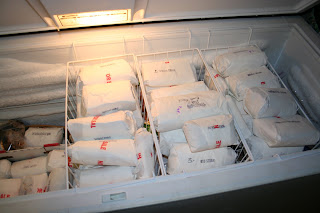 Roger stated that 2 Black Angus steer will fill a 55-gallon drum with waste of fat, etc., when butchering yet ALL 12 head of Pinzgauer beef butchered only filled (2) 55-gallon drums with waste! The meat is lean and tender. Graded at Choice, an excellent quality and marbling. The grades for beef are Prime, Choice, Select, Standard, Commercial, Utility, Cutter, and Canner. Quality grading is voluntary by packer and not all packers choose to grade the meat. Pinzgauer beef have increased wean weights, thrive in all climates, early maturing and disease resistant, with tender lean beef without losing "any" flavor.
The cows were grain fed and went to the Butcher in late August. This is a general time that most 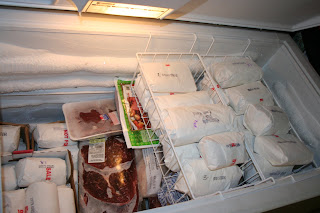 beef cattle go to the butcher in the Fall period. The meat was hung for 21 days and then cut into specifications of each person paying for their half or quarter. The butcher, Roger, is a wholesale butcher, not retail. This means he breaks the beef down into specific cuts and only offers "some" specialty cuts. I, of course, have to be a pain in the butt and ask for all the specialty cuts I can get away with, such as Porterhouse steaks, briskets, leftover tender roast after cutting the Porterhouse steak.
An interesting point I learned and want to share is this. My half cow weighed 428 pounds. After butchering and discarding large bones, and waste, the meat I received was around 300 pounds. I paid 3.50 per pound "before" cutting and packing. This is a great price compared to what I pay in the grocery store for my different cuts of beef throughout the year. BUT I had no idea when ordering a half cow ~ a person only receives 3 Porterhouse steaks per cow side. If I order a whole cow, a butcher can only get 6 Porterhouse steaks. The region for this tender and luxurious cut of beef is that small of an area on a cow. I was shocked. Here I am counting all my steaks before I knew the facts. I would like to also add that I printed out a diagram of the cow and all the sections, labeled all the cuts I could receive out of each section and gave an estimation of how much hamburger, stew meat, and soup bones I would get. The whole research and labeling took me about 3 hours. I was told to call the butcher directly. . .and boy did I get a wake-up call. That is when I found out that butchers cutting and packing cows in large numbers for farmers all over the area are wholesale butchers and Roger told me how my cow was going to be cut up, what I could expect for cuts of meat, what did I want for a general weight per roast (4 or 5 pounds each: I choose), did I want soup bones, (I asked for the brisket and Porterhouse: 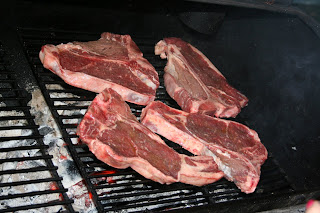 specialty cuts), what grade of hamburger did I want (He listed 2 percentages of fat content), (Oh, I also asked for a rib roast so I was given a choice of how many bones I wanted: 6 or 7) and did I want more steaks then roast? Holy SMOKES! This whole conversation lasted 5 MINUTES TOPS! The man was professional, nice and straight to the point. No holds barred! My little diagram and cuts got to go into a file for "gee, now I know what to look for in the grocery store when I want something to fit a specific recipe". Example, Skirt steaks. . .different then flank steaks. I use this cut quite often. I'm on my own here. Don't get me wrong, I have oodles of all the cuts I did recognize, like rib roasts, cross-cut rib roasts, tri-tip steaks, top-round steaks, tenderloin steaks, cubes steaks, and every roast I could possibly think of. It is just that, well, how many times does a person dissect a whole beef in 5 seconds. . .okay, an exaggeration. Now that I understand Roger AND I now have the beef in my freezer, I feel MUCH better. I didn't try the beef until the third night after receiving it because Larry and I would look at the freezer and go "What do you want to try first? Well, I don't know, what would you like to try first?" Then I would get frustrated and go fix something that we took out of our now organized freezers that became part of the "USE NOW" pile. We ended up BBQ'ing Rib Steaks. Even this was an 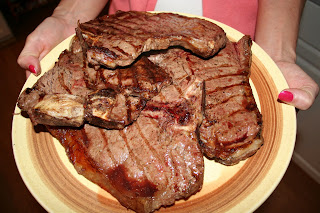 ordeal for us. You see, I have a huge barrel BBQ'er for charcoal and smoking that is MINE and Larry has a HUGE gas grill with this fancy shmancy searer and there was a discussion on WHO was going to be the BBQ'er of choice for the first go around. Well, since I sneakily ordered this half cow and "then" told Larry after I committed us. . .I got caught up in the moment. . .I couldn't help myself. . .I LOVE a filled freezer because I feel like I am taking care of my family, and I had promised to work all the overtime I was given and that I could handle. . .hence my working 6 days a week, 10 hours a day for the last 2 months, (except for when we took off a week for San Francisco, which the overtime also helped on), I got to grill the first steaks!
I didn't put anything on the steaks except pepper and a little red pepper flakes. Salt goes on 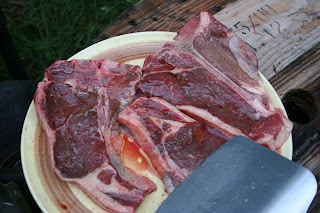 later because I feel salt pulls out to much moisture from the meat while cooking. After BBQ'ing to a medium rare, I let the steaks sit for 10 minutes to let the juice absorb back into the meat. The steaks were huge and the flavor was great! I was worried over all the talk about how lean the meat was and if I would loose out on flavor. . .you know, less fat content maybe less flavor? Well, restaurant quality flavor! Very good!
New problem: I organized the freezer, cataloged all the cuts of beef, and now I don't want to use them yet because I am still on my "high" for having a full freezer. I start using the beef, the freezer just won't be as full. I know, silly. . .but do you have any idea of what I went through inside (guilt wise) trying to get this beef? Yeesh! This next weekend, I am getting the "whole" weekend off. All 2 days!
P.S. I haven't defrosted my freezer yet. . .it was after work when I organized my freezer and I was already tired. Please forgive the ice built-up. . .I am a little embaressed! =)
Posted by ROHIB at 10:07 AM