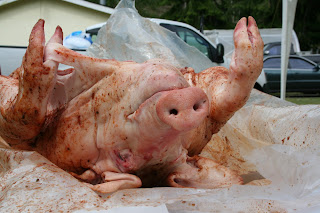 Mom and Dad decided to come up from Yuma, Arizona to visit all of us children over the 4th of July. All the way to Raymond, Washington and Port Orchard. I wanted to make this a trip they wouldn't forget in a long time so my sister and I discussed having a pig roast. Why not? Now, I have never done a pig roast but just how hard could it be?

Actually, figuring out HOW I wanted to roast the pig turned into a huge event. There is roasting the pig underground, like a Hawaiin tradition, roasting a pig using a rotiserrie over a spit, rotisserrie in a LARGE BBQ, just sitting in a large BBQ using indirect heat, or using a La Caja grill. All methods required 15 to 18 hours of cooking time EXCEPT the La Caja grill. Well, I didn't own a La Caja grill BUT I watched Bobby Flay use one on the FoodNetwork show one night a little while ago. I got onto the internet, looked up La Caja and there it was. . .the grill on wheels. 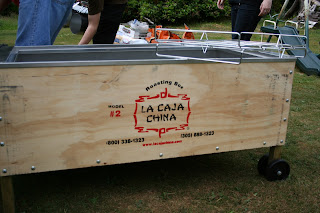 After working for 3 weeks on how I was going to grill this pig and asking everyone that I found having experience, I really wanted to have this part of research over with so that we could get down to the nitty gritty on what was going to be added to the pig for flavoring. The whole process looked so easy. The rack to cinch the pig down ahead of time is already there and because the pig is laid open and squeezed as thin as possible, cooking time is dropped drastically. Since the pig is being roasted at my sister's house, 2 hours away, I really didn't want to take 2 days to BBQ. So I ordered the grill, coming out of Florida, and in 1 and 1/2 weeks, there it was, on my doorstep in pieces. Hubby put the grill together and I ordered the pig.

Farmer George is a local butcher shop in downtown Port Orchard and the butchers are used to dressing out pigs on a regular basis. In fact, pig roasting around here is pretty popular. Who knew? Well, now I am added to the list. By using the La Caja for cooking the pig, I no longer had to worry about what I was filling the empty stomach cavity with ~ so the stomach didn't cave in on itself during the final stages of cooking. A dry rub is all that is necessary, although many pros also inject a marinade. Piggy was picked up the night before, spine was split using a cleaver and hammer so the pig would lay flat, and olive oil along with a dry rub was adhered. Everything was put onto ice and chilled overnight and for the 2 hour drive down to Raymond. For future reference, a 100 pound pig gives 40 pounds of meat. The rest is carcass, head, and the innards before the butcher cleans the pig out.

Once down at Rachel's house, the fun begins. 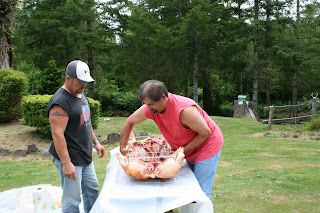 The pig is taken out of the body bag, laid out on the table and cinched down between 2 metal racks so that the whole pig can fit into the La Caja grill. This is the hardest part to the process. My hubby and brother-in-law are working on the process here in the picture. Did we mention learning curve? 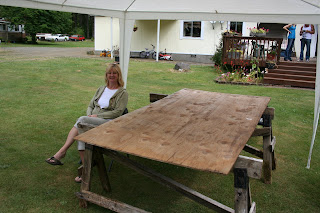 The weather is drizzily, which does not do well for gathering outside and socializing. Mom is hiding out under the tarp. 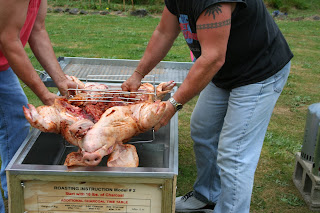 Yay! The pig is cinched down and now everyone was worried about whether the pig would fit into the box or not. Feet and head are stiff so flexibility is limited. Also, the pig is at maximum weight for the grill. . .and maybe the pig is freakishly long for it's weight =D! 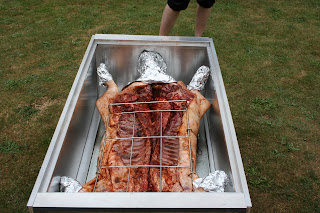 Nope, piggy slipped right into the box. Head, feet, and tail are all covered with aluminum so that each part does not turn black. My first learning experience is just around the corner. You see, the dry rub I used had a LOT of brown sugar in it and when the charcoal got hot, the brown sugar blackened the pig's skin. Scared the majeebees out of me. I thought I ruined the pig right off the get go. The pig was fine, just the skin got black but the meat was perfect in the end. 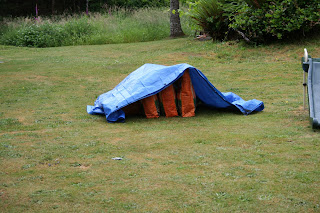 The weather rained off and on so the charcoal had to be kept under a tarp. What a pain in the butt. 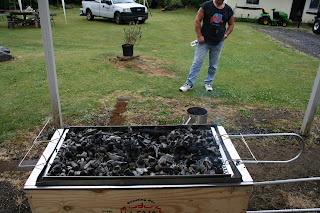 The directions on the grill stated that 12 pounds of charcoal needed to be lit to get the cooking process started. We put a thermometer through the side of the grill to measure the inside temperature and after lighting 10 pounds of charcoal, the temperature was 500 degrees! My sugar based dry rub blackened instantly on one side of the pig! Next time, I will use less sugar AND cover the whole pig in foil until close to the end. Then uncover the pig to get the skin brown. 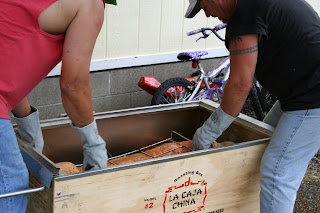 To flip the pig over, the charcoal tray has to be lifted off first. Then flipping the pig is a two-person process. 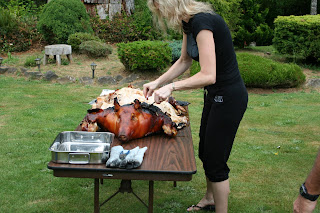 5 hours later, the pig is done. I was hurrying, trying to get all the blackened skin off before anyone started taking pictures. I didn't want my first cooking event scaring the heck out of onlookers =D. See, the meat is perfect under the skin. 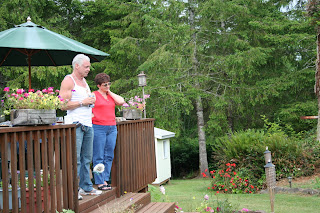 Dad and family friend are supervising. 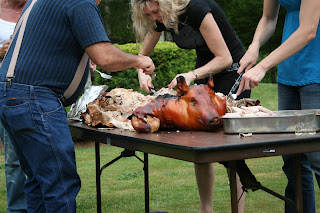 The rest of the group starts jumping in to help strip the meat off of the carcass. We had one expert pig carver present and he saved my bacon (pun intended =D). I would still be there pulling pork off the bones if the gentlemen in suspenders was not there showing me how it is done. I think he had the whole pig dissected in about 30 minutes. Then it was all about pulling pork off of individual bone pieces. No biggie. 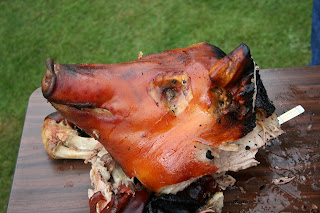 I left the head and hoped I could later figure out what to do with it. I was soon to find out that there is a LOT of tender meat on piggy's head!

Everyone else left to clean themselves up and I am here to finish cleaning the pork off of the bones. What a job. Tomorrow, I will let everyone know what I did with all the meat with recipes and pictures to go with. Also, I will include food that I made here at 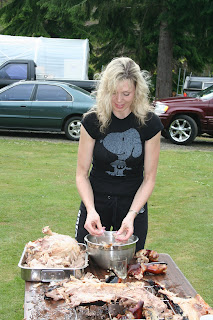 the BBQ. I had a blast but I was so TIRED after the whole thing was done.